Fire and ice: adventures in Iceland

You could be forgiven for mistaking Iceland's scenery for a sci-fi movie set. Boiling water blasts out of geysers, and cracks in the earth belch steam. Arid plains and mustard-coloured rocks stretch endlessly into the distance. Volcanoes lurk menacingly under a covering of snow.

Iceland is guaranteed to ignite your senses, so why not leap feet-first into the best adventures of the ‘land of fire and ice’ – you’ll emerge exhausted, exhilarated and dusted in volcanic ash.

Descend into a volcano 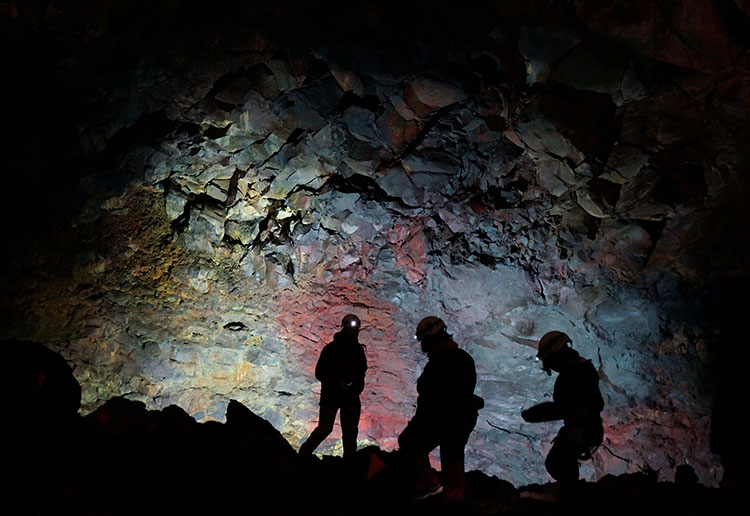 Iceland is the only place in the world where you can venture directly into a volcano’s magma chamber. Usually hardened lava seals volcanoes shut after an eruption, so the depths of Thrihnukagigur are an underworld normally hidden from sight. As you hike to the volcano across Bláfjöll's lava fields, every step seems to take you further away from the familiar. The ground ripples with subterranean caves and crevasses, and weather-beaten volcanic rocks evoke the feeling of trekking on Mars. After the hike, a stomach-churning descent by open cable lift takes you deep inside dormant Thrihnukagigur, right at the meeting point of two tectonic plates. After being lowered into the volcano (that’s a drop of 120m, more than the Statue of Liberty’s height) you can explore the yawning chamber aflame with colours from peacock blue to gold. Listen out for a distant rumble, just in case...

Inside the Volcano (www.insidethevolcano.com) leads guided tours from Iceland’s capital, Reykjavik, including a coach ride to Bláfjöll mountain where you’ll hike for an hour to reach the site. Wear quality hiking shoes and bring water. The team at Inside the Volcano will kit you up with a helmet and harness. Volcano descents run from May to September. 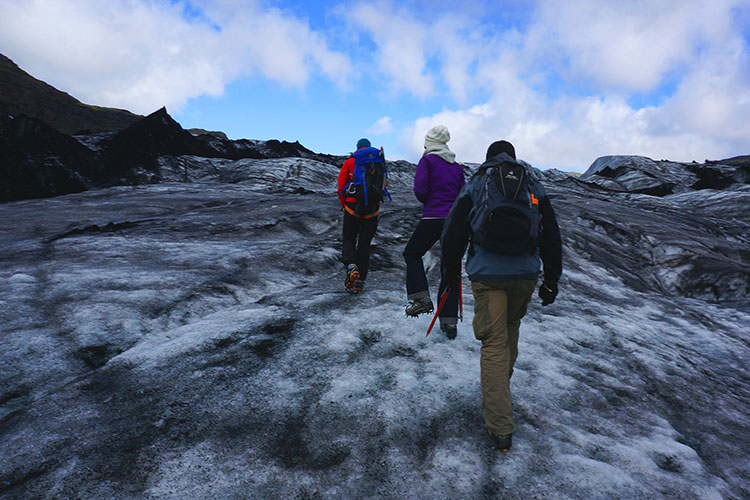 Tie on the crampons and grab an ice axe: you are about to scrape and slash your way up the eerie and ever-moving glaciers that give Iceland its name. Beginners should try Sólheimajökull – only an hour's drive from the unmissable Jökulsárlón glacier lagoon – where you can take your pick of guided walks for all levels. Naturally formed ice sculptures squat all over Sólheimajökull, and the glacier is still streaked with ash from the infamous 2010 eruptions of the Eyjafjallajökull volcano. Watch your step as you are gawping at the landscape's dramatic contours – there are deep crevasses so it's essential to follow your guide's advice.

You’re in safe hands with Mountain Guides (www.mountainguides.is), whose selection of guided treks range from two-hour glacier walks to challenging 16-hour climbs. Glacier trekking is enjoyed all year round in Iceland.

Iceland's horses are so glossy of mane and smooth of hide that they bring to mind a My Little Pony toy. But don't be fooled as you admire them cantering flirtily around farmland – although pint-sized, these horses are exceptionally strong, perfectly evolved to withstand Iceland's brutal winters and craggy terrain. Their cultural importance dates back to the Viking Age, and to this day Iceland's horses are used to round up sheep scattered around the highlands. They also happen to be very placid-natured - perfect for novice riders. You'll find guesthouses, travel companies and occasional farmhouses across the country offering horse rides, but Iceland's second city, northern capital Akureyri, has some especially scenic routes. Just minutes out of the city you can canter around windswept farmland and trot along the ash-coloured beaches lining Eyjafjörður, Iceland's longest fjord.

Skjaldarvík guesthouse offers guided horse rides for all levels only 15 minutes out of Akureyri around farmlands and on the banks of the fjord. More serious riders can arrange multi-day treks with Pólar Hestar stables (www.polarhestar.is) north of Akureyri. Some stables only run summer rides, but plenty operate year-round - some even offer horseback Northern Lights tours (www.eldhestar.is). 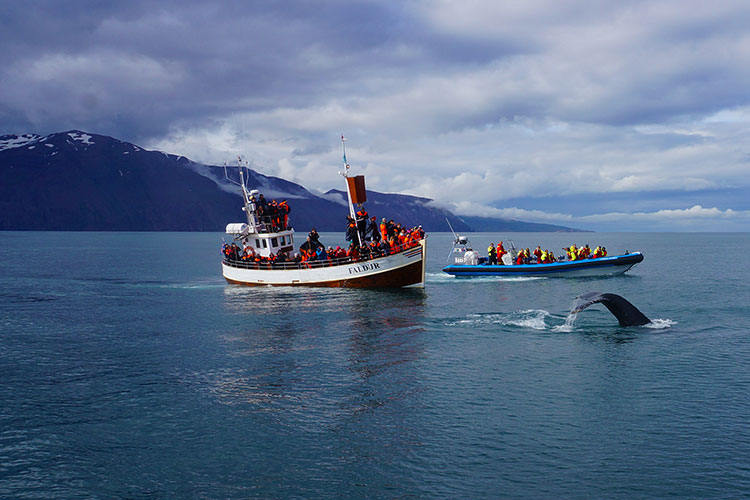 Húsavík, 45 minutes' drive from Akureyri, is Iceland's premier whale watching destination. Being at the confluence of two river estuaries, Skjálfandi bay gets algae blooms by the bucketload, an irresistible feast for the variety of whale species that head to these shores. Minke, humpback and even the largest creature on Earth, the blue whale, have all been spotted from Húsavík's boats and sightings are almost guaranteed. Many whales will take three or four deep dives, re-emerging near the same spot (ideal if your first snapshot showed nothing more than a blurry tail). But don’t let the gentle giants overshadow the other wildlife draw: puffins. These somersaulting seabirds amass around the bay's small islands throughout the summer.

If you want to get hands-on, choose a schooner excursion with North Sailing (www.northsailing.is) and help unfurl the sails and steer the boat towards the next giveaway whale spout. Whale watching tours in Húsavík usually run from April to November. 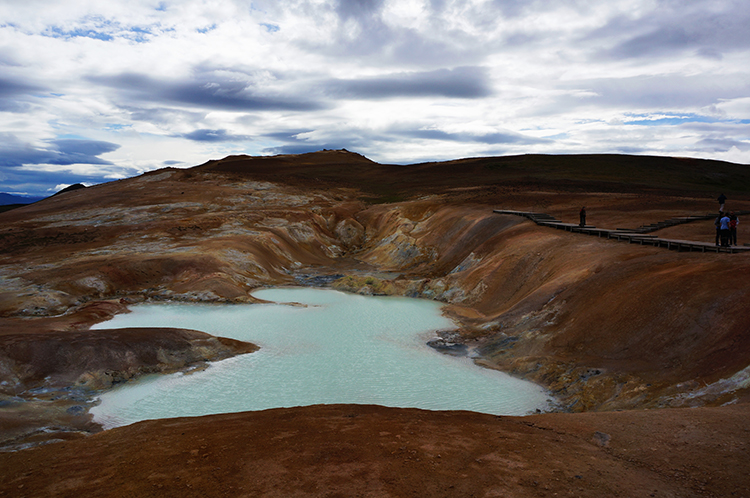 Your first steps on to the lava fields at Krafla will be disorienting. A tang of sulphur in the air, tar-black rocks in every direction, and are you imagining the heat beneath your soles? Krafla is Hell on Earth – in the most fascinating way. As you trek around Iceland's most active volcano (and that's saying something) you will see billows of steam hissing from the ground, acid-green pools of simmering water, and gnarled hillocks that belong in a goblin kingdom. Periodically the site has experienced devastating explosions, including the famous 'Krafla fires' in the 1970s. With such forbidding history, it's hard not to be awed by this apocalyptic landscape.

Krafla is a short drive northeast from the Lake Mývatn area, famous for its rock formations (and swarms of midges). Trails from Krafla’s parking area lead around the menacing Leirhnjúkur caldera - don’t stray from the marked paths. You can visit the area year-round but check the weather forecast on the day you set out and heed any warning signs.

So you’ve unzipped your windbreaker and collapsed at a local café – but the day’s adventures aren’t over yet. Some of Iceland’s cuisine can seriously challenge the palate. Don’t leave without sampling sheep’s head (readily available in local supermarkets), slátur (Icelandic tripe sausage) and hákarl (fermented shark meat). Hákarl is often considered a daredevil cuisine but before you wince at that whiff of ammonia, ponder its amazing journey to your table. The flesh of Greenland shark, poisonous if eaten fresh, is buried in sand to ferment for two or three months. The meat is then exhumed, chopped into strips and hung out to dry for another few months, before being diced and brought to dinner tables all over Iceland. Breathe through your mouth when sampling it for the first time, the smell is far more off-putting than the taste.

Brennivín, Iceland’s most head-spinning liqueur, is often served as a chaser to nibbles like hákarl. Ready a glass of this aromatic schnapps if you're planing to test your tastebuds.

Hiring a car and taking a circuit of Iceland's famous Ring Road is the best way to travel between adventures. Glaciers, volcanoes and starting points for hikes are surprisingly easy to reach from Route 1. Ten days would allow for a comfortable (if efficient) circuit but allow two weeks or more if you are planning adventures along the way. And whatever you do, pack good hiking boots. Even trails marked 'easy' will shred flimsy footwear.

Anita Isalska is an editor and writer based in Lonely Planet’s London office. Anita scaled glaciers and volcanoes on her travels in Iceland, but was brought swiftly back down to Earth by a mischievous Icelandic horse. Follow her on Twitter @lunarsynthesis. 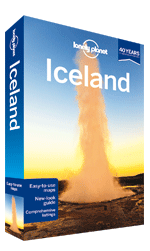 Where else can you inspect the inside of a volcano, stand amid spouting geysers, and dine on fermented shark? Explore this otherworldly island in greater detail with Lonely Planet's Iceland travel guide.