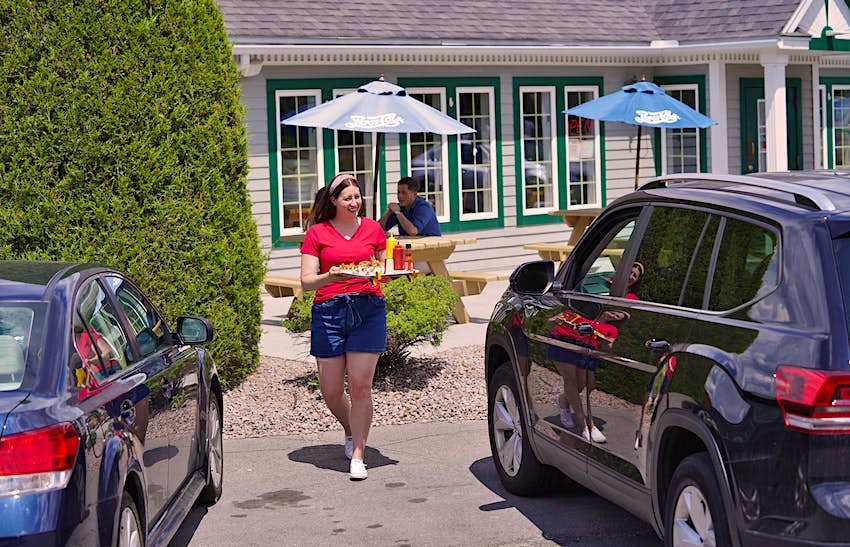 As COVID-19 alters dining out across the US, an old service has had an unexpected resurgence. Carhops are popping up all over the country bringing with them memories of teeny boppers, juicy hamburgers and super thick milkshakes. Here are 11 drive-ins serving up a little nostalgia with a side of fries.

This three-generation-run drive-in has daily specials that go well with its homemade root beer. Find buy-one-get-one-free offerings for chicken tenders on Mondays, hot dogs on Tuesdays and hamburgers on Wednesdays. There’s a hamburger, fries and small drink combo deal through Thursdays and a weekend lobster roll combo special. Meals are delivered by carhops dressed in red shirts and white pants and on weekends, carhops don poodle skirts.

This landmark drive-in was opened in Norfolk, VA, by George Doumar and his brother Abe in May 1934. George ran an ice-cream cone concession stand at Norfolk’s Ocean View Amusement Park, and some credit Abe with inventing hand-rolled waffle cones. Orders are taken car-side with handhelds and delivered either on a tray if you're eating in, or in bags for carryout. Try the minced barbecue sandwich, with a North Carolina vinegar-based recipe, or Taylor Ham sandwiches, ice-cream cones and limeades.

This nearly 75-year-old South Carolina carhop can accommodate about 30 cars. Drivers honk their horns when pulling in to alert the carhops. The vast menu features everything from barbecue and burgers to salads, seafood and soups. Yet the specialty is what’s called “A-Plenty,” meaning any chosen item can be smothered and piled high with homemade onion rings and fries. Top sellers are a Chili-Cheese A-Plenty and Hash A-Plenty.

Chicago’s only drive-in on the Northwest Side neighborhood of Norwood Park is easy to spot, with two 12-ft fiberglass wiener caricatures of its founders Flaurie and Maurie Berman perched on its rooftop.

Through its electronic ordering system, drivers can pull in, press a button and place an order. Carhops deliver boxes stuffed with Superfries and a Superdawg – a pure beef hot dog on a poppy seed bun that’s garnished with golden mustard, piccalilli, a kosher dill pickle, chopped Spanish onions and a hot pepper.

Named after a 300-year-old sycamore tree, this landmark in Connecticut has drivers either pull into the parking lot and flash their headlights or place an order over the phone. Sample its homemade root beer, along with its signature French-style steak burgers, made from daily ground fresh meat. The five-ounce Dagwood Burger is topped with American cheese, tomato, onion, pickle, mustard, ketchup and a touch of mayo. On summertime Saturday nights, watch the classic cars cruise into the lot.

First opened as the Southside A & W Drive In in 1948, this independently owned drive-in is best known for serving up its creamy in-house made Real Draft Root Beer, which pairs nicely with its Chicago and regular-style hot dogs, crinkle-cut french fries and hand-dipped ice-cream from Wisconsin’s own Cedar Crest. Carhops wheel over on old-style roller skates – part of their uniform since the early 1980s.

The oldest restaurant in town, this drive-in was a favorite of a young Tupelo native named Elvis Presley. Dine in the “Elvis Booth” as you step back in time at this historic spot. Accommodating about 30 cars, plus onsite porch dining, the drive-in is best known for its Dough Burgers, which are mixed with flour to make the meat go further. There are also tasty barbecue plates and classic sandwiches.

This peculiarly named drive-in in West Virginia is best-known for its unexpected dishes – in particular, pizza. Yes, you can order a pie with topping choices ranging from pepperoni and hot peppers to green or black olives and even shrimp. Hot dogs have character, too – served with English top cut buns whose sides get toasted. Other menu items include sandwiches, burgers and dinner plates and homemade dessert pies.

Mac's Steak in the Rough in Albuquerque is a long-time family-run drive-in with a speaker system connecting its restaurant with red shirt and black pant uniformed carhops doling out boxed orders. The venue’s top order is the eponymous “Steak in the Rough” that's made up of breaded steak fingers folded into a flour tortilla with fries, cheese and green chile gravy. Wash it all down with strawberry or cherry-flavored lemonade or limeade.

With three locations, this brother-owned chain is known for its Red Hots, a northern New York state version of Michigan hot dogs. Here, hot dogs are placed in steamed buns and adorned with a spicy meat sauce, mustard and optional onions.

This one-time dairy center turned family-restaurant is located in what was once the northern turnaround point for cruising along Main Street; back then, teens sat on their hoods and drank milkshakes in the parking lot. These days, carhops bring out four-pound banana splits, hush puppies and sweet tea. An onsite barbecue pit smokes meat in hickory and oak, which then get covered with a vinegar and ketchup-based dip and paired with red slaw.

The best things to do in mighty Montana

The 11 most incredible national parks in South Africa for spotting wildlife, hiking and more