In the last 15 years, London has seen incredible growth in its brewing industry from a mere two breweries in 1999 to more than 50 today. Almost all of these new enterprises are small, independent and produce high-quality, innovative styles of beer – an approach to brewing that’s been given the catch-all moniker 'craft'. Taking their lead from the craft-brewing industry that exploded in the USA in the early 90s, these businesses are eschewing the mass market to appeal directly to discerning beer aficionados. Here's a definitive guide to sipping your way around London's brew scene. 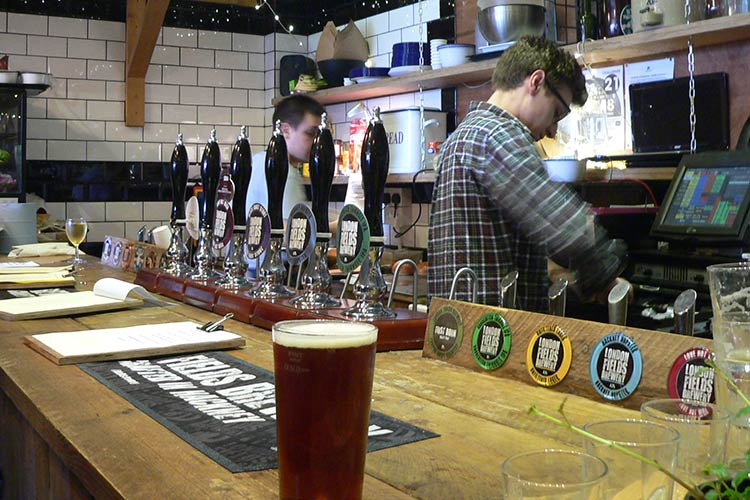 By far the best way to get an up-close view of brewing in the capital is to take a brewery tour. These usually involve a walk through the brewery, with a comprehensive overview of the process and a chance to sample the wares fresh from the tanks. Meantime (meantimebrewing.com) in Greenwich, who kicked off the capital’s brewing renaissance in 2000, offers regular informative sessions, as well as culinary events such as pie and pint nights. Sambrook’s (sambrooksbrewery.co.uk), a must for cask ale fans, holds an enthusiastic monthly tour, with generous servings of its traditional brews. Further north, at Camden Town Brewery (camdentownbrewery.com), you can join a weekly group and check out their canning line and a dry hopper named Mother Superior. Or head over to Hackney, where London Fields Brewery (londonfieldsbrewery.co.uk) conducts casual tours with tastings in their convivial tap room; The Five Points Brewing Co (fivepointsbrewing.co.uk) hosts a similar monthly event. Tours usually cost in the region of £15 per person, and it's best to book ahead. 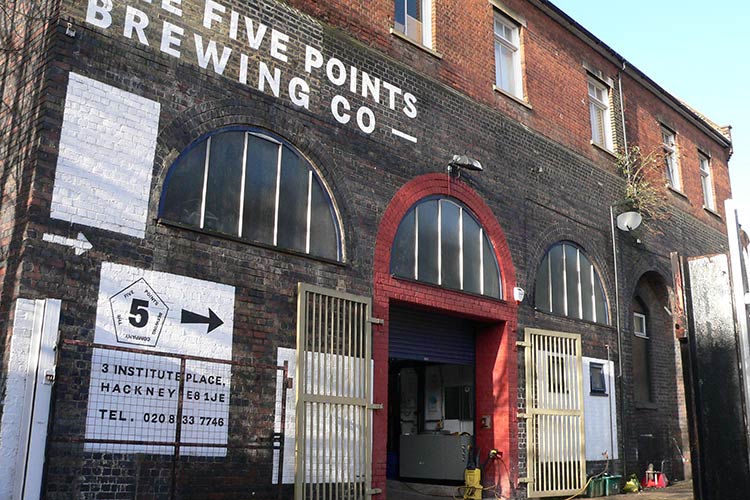 If you can’t make a tour, a great way to meet local brewers and drink directly from source is a Saturday stroll through Bermondsey. Start off with a bite to eat at foodies’ favourite Maltby Street Market (maltby.st), from where you can drop in on five diminutive breweries, all hidden away under the railway arches. First up are recently opened Anspach & Hobday (anspachandhobday.com), serving a notable porter, and nearby Brew By Numbers (brewbynumbers.com), where each bottle is numbered according to its style and recipe. Sitting halfway between the two, The Kernel (thekernelbrewery.com), the first to open here, also has an excellent selection. Cut down little Almond St to find tiny Partizan (partizanbrewing.co.uk), selling finely crafted brews with beautifully designed labels. And finish up at Fourpure (fourpure.com), tucked at the back of a trading estate, with an interesting spread of beers, inspired by the brewers’ travels. 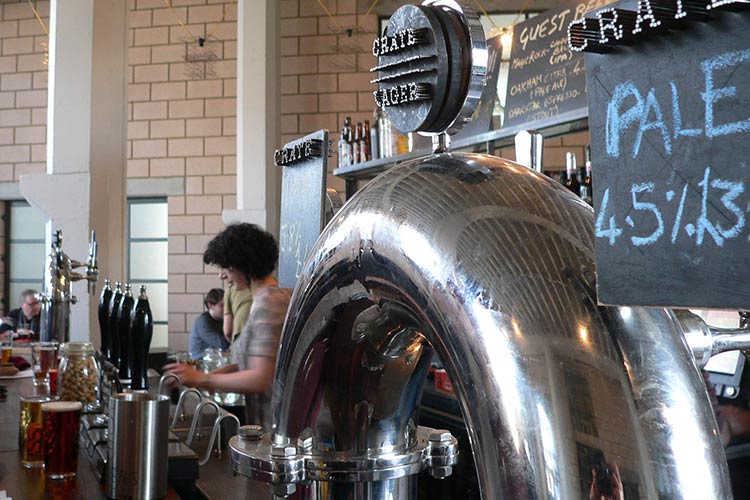 Another craft-beer hotspot, East London is home to a batch of accomplished breweries and brewpubs. In addition to London Fields and The Five Points, Redchurch (theredchurchbrewery.com) in Bethnal Green opens the doors of its brewery and cute, first-floor bar on a Thursday evening, with six of its beers on tap. There’s nowhere more rock ‘n’ roll than Duke’s Brew and Que (dukesbrewandque.com), which doles out lip-smacking ribs and is the original home of Beavertown brewery (beavertownbrewery.co.uk), headed-up by Logan Plant, son of Led Zeppelin’s frontman. The Cock Tavern (thecocktavern.co.uk) in Hackney serves a dizzying array of craft beers, many from nearby breweries, as well as its own Howling Hops, produced in the cellar below. Another brewpub, Crate Brewery (cratebrewery.com), housed in a made-over print factory, has its own impressive range as well as tasty wood-fired pizzas, all with a canal view. While you’re in the area, look out for excellent, locally produced beers from Hackney Brewery (hackneybrewery.co.uk) and Pressure Drop (pressuredropbrewing.co.uk).

Failing all that, if you want to just cosy up in the pub and conduct your own taste test, there are scores of places with a fantastic line-up of craft beer from London and beyond. Most often recommended by brewers themselves are: The Southampton Arms (thesouthamptonarms.co.uk), which also has a great selection of ciders and meaty treats; The Rake (utobeer.co.uk/aboutus_rake.html), a tiny bar bursting with beers from around the world; and the Old Red Cow (theoldredcow.com), serving a comprehensive range on draught. Look out for the Beer Rebellion bars of Late Knights brewery (lateknightsbrewery.co.uk), as well as handy chains The Craft Beer Co (thecraftbeerco.com), BrewDog (brewdog.com/bars) and The Draft House (drafthouse.co.uk). 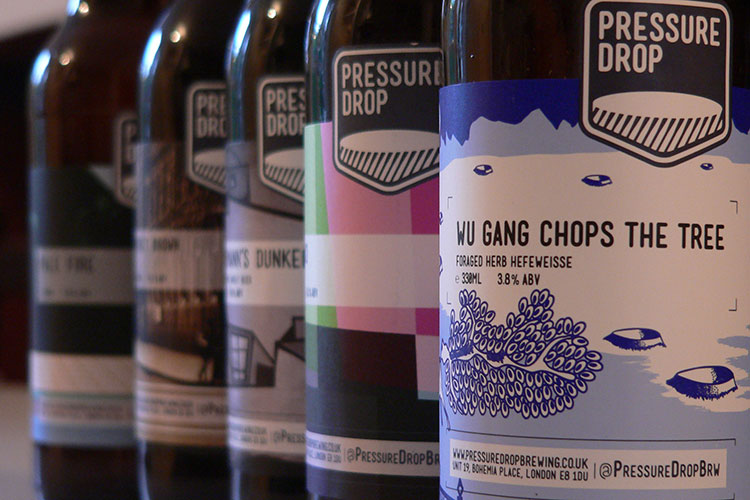 To delve a bit deeper, the Craft Beer London app (craftbeerlondon.bluecrowmedia.com) is an expert guide to the city’s breweries, pubs and shops, all mapped and rated. Copies of their printed guide and map can also be found around the city. Clued-up beer tweeters include @MelissaCole, @Will_Hawkes, @markdredge and @desdemoor, and following individual breweries is also a good way to hear about beer-based celebrations and one-off events. Beer festivals that focus on smaller breweries are also beginning to emerge: Craft Beer Rising (craftbeerrising.co.uk), London’s Brewing (londonsbrewing.co.uk), and the London Craft Beer Festival (londoncraftbeerfestival.co.uk) are all worth a look. 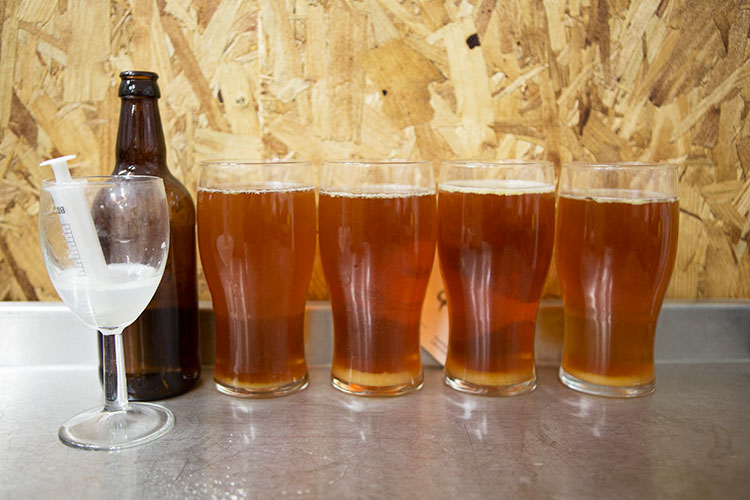 Don’t know your cask from your keg? Here’s a basic guide: