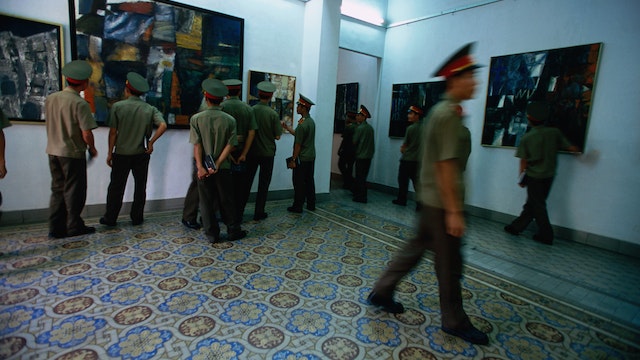 With its airy corridors and verandas, this elegant 1929 colonial-era, yellow-and-white building is stuffed with period details; it is exuberantly tiled throughout and home to some fine (albeit deteriorated) stained glass, as well as one of Saigon's oldest lifts. Hung from the walls is an impressive selection of art, including thoughtful pieces from the modern period. As well as contemporary art, much of it (unsurprisingly) inspired by war, the museum displays pieces dating back to the 4th century.

These include elegant Funan-era sculptures of Vishnu, the Buddha and other revered figures (carved in both wood and stone), and Cham art dating from the 7th century to the 14th century.

More statuary is scattered around the grounds and in the central courtyard (accessed from the rear of the building). There’s a selection of lovely prints for sale (from 150,000d) at the shop. Building No 2 alongside hosts lesser-known works and stages exhibitions.

The space on the pavement in front of the impressive old Railway Office, up the road between Ɖ Ham Nghi and ƉL Le Loi and facing the roundabout, was used for public executions in the early 1960s.