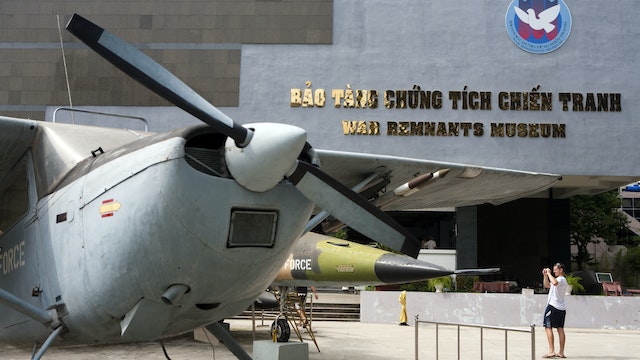 To understand the US invasion of Vietnam, and contextualize its devastating impact on the country's civilians, this remarkable and deeply moving museum is an essential visit. Many of the atrocities documented here are already well publicized, but it's rare to visit a museum such as this, where the victims of US military action are given the space to tell their side of the story.

While most of the displays are written from a Vietnamese perspective, much of the disturbing photography of war atrocities come from US sources, including the images of the My Lai massacre, where more than 500 unarmed South Vietnamese civilians were brutally killed by US soldiers.

Even travellers with little interest in the war should not leave the city without visiting. Its absorbing exhibits give visitors an invaluable insight into a defining chapter in the country’s history – and a deeper understanding of present-day Vietnam as a result. Allow at least a couple of hours for your visit.

The museum, which was formerly known as the Museum of Chinese and American War Crimes, primarily deals with the American War, but the French-colonial period and conflicts with China are also documented. US armoured vehicles, artillery pieces, bombs and infantry weapons are on display outside. One corner of the grounds is devoted to the notorious French and South Vietnamese prisons on Phu Quoc and Con Son islands. Artefacts include that most iconic of French appliances, the guillotine, and the notoriously inhumane ‘tiger cages’ used to house war prisoners.

The ground floor of the museum is devoted to a collection of posters and photographs showing support for the antiwar movement internationally. This somewhat upbeat display provides a counterbalance to the horrors upstairs.

Some of the images on show are very upsetting, in particular photos of widespread destruction from US napalm bombs and the horrific toxic effects of Agent Orange on Vietnamese citizens. Many visitors may need to take a break between exhibits. The museum also offers the rare chance to see some of the experimental weapons used in the war, which were at one time military secrets, such as the flechette, an artillery shell filled with thousands of tiny darts.

Upstairs, look out for the Requiem Exhibition. Compiled by legendary war photographer Tim Page, this striking collection documents the work of photographers killed during the course of the conflict, on both sides, and includes works by Larry Burrows and Robert Capa.

The War Remnants Museum is in the former US Information Service building. Captions are in Vietnamese and English.