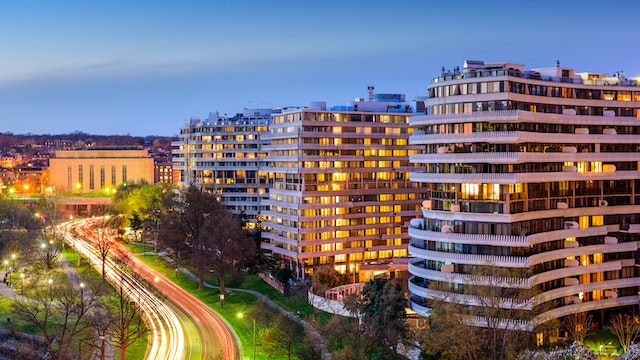 Designed by Italian architect Luigi Moretti and DC-based landscape architect Boris Timchenko and constructed between 1963 and 1971, this five-building curvilinear riverfront complex encompasses apartments, fountains, terraces, boutiques, the recently refurbished Watergate Hotel, and the office towers that made ‘Watergate’ a byword for political scandal after it broke that President Nixon’s ‘plumbers’ had bugged the headquarters of the 1972 Democratic National Committee here.

Though now acknowledged as an architectural masterpiece, the Watergate was derisively refered to as 'Antipasto on the Potomac' on its opening in 1971. The first large-scale mixed-use development in DC, it lost its lustre as a residential and commercial address after the scandal, but in recent years has edged back into fashion.