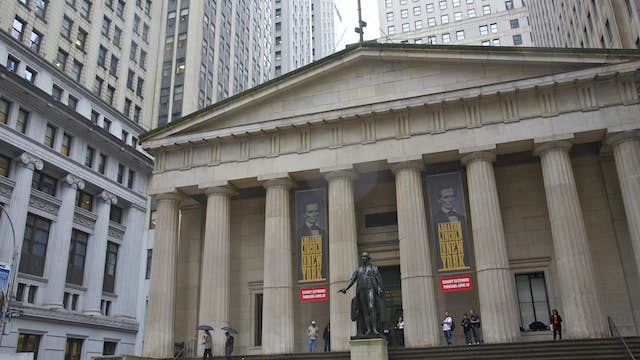 A Greek Revival masterpiece, Federal Hall houses a museum dedicated to postcolonial New York. Themes include George Washington’s inauguration, Alexander Hamilton’s relationship with the city, and the struggles of John Peter Zenger, a printer who on this site in 1734 was jailed, tried and eventually acquitted of libel for exposing government corruption in his newspaper. There's also a visitor information hall with city maps and brochures.

Distinguished by a huge statue of George Washington out front, the building itself stands on the site of New York’s second City Hall, completed in 1703. The building was remodeled by French engineer Pierre L'Enfant in 1788 and renamed Federal Hall; George Washington took his oath of office as the first US president on its balcony on April 30, 1789. (The museum's artifacts include the very slab of stone on which Washington stood.) After that structure’s demolition in 1812, the current building rose in its place between 1834 and 1842, serving as the US Customs House until 1862.

Free 30-minute tours are offered each day at 10am, 1pm, 2pm and 3pm. Call ahead to inquire about tour times and Saturday opening hours, as these are sometimes reduced due to staffing constraints.