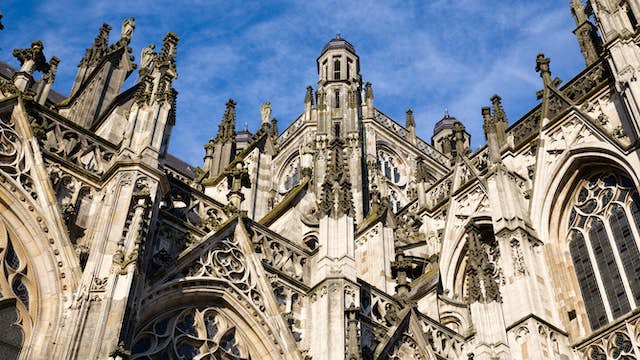 New York’s most impressive house of worship is a towering monument that looks like it's straight out of medieval Europe. Built in a mix of styles – with elements of Romanesque, Gothic and neo-Gothic design – St John’s is packed with treasures, from gorgeous stained-glass windows to 17th-century tapestries, as well as works by contemporary artists such as Keith Haring and Tom Otterness. The cathedral has yet to be completed; some even jokingly refer to it as ‘St John the Unfinished.’

Aside from a one-hour highlights tour (11am and 1pm Monday through Friday, and 11am Saturday), the cathedral also offers a one-hour vertical tour (at 10am Mon, noon on Wednesday and Friday and noon and 2pm on Saturday), taking you on a steep climb to the top of the cathedral (bring your own flashlight).

Prayer services are held three times daily (four times on Saturday; see the website for schedule). Two special services worth seeing are the annual Blessing of the Animals, a pilgrimage for pet owners held on the first Sunday of October, and the Blessing of the Bikes, held on the first Saturday in May, when local riders cruise in on everything from sleek 10-speeds to clunky cruisers.

The cathedral itself was founded in the 19th century by Bishop Horatio Potter, with the first cornerstone laid on St John’s Day in 1892. The construction, however, was hardly a breeze. Engineers had to dig 70ft in order to find the bedrock to which they could anchor the building. Architects died or were fired. And in 1911, the initial Romanesque design was exchanged for something bigger and more Gothic. Construction has been halted on countless occasions (whenever funds run out). To this day, the north tower remains unbuilt, and a ‘temporary’ domed roof, constructed out of terra-cotta tile in 1909, still shelters the crossing. In 2001, there was a raging fire to contend with, too. Much of the church has since been restored, but the north transept, which was severely damaged, has not been rebuilt. If it is ever completed, the 601ft-long cathedral will rank as the third-largest church in the world, after St Peter’s Basilica in Rome and the Basilica of Our Lady of Peace at Yamoussoukro in Côte d’Ivoire. (Just don’t count on this happening in the foreseeable future.)

Framing the western entrance are two rows of Gothic-inspired sculptures that were carved in the 1980s and '90s by British artist Simon Verity (b 1945). On the central pillar stands St John the Divine himself, author of the Book of Revelation. (Note the Four Horsemen of the Apocalypse under his feet.) Flanking him are various biblical figures, including Moses, John the Baptist and Noah. Themes of devastation are rife, but most unnerving is the statue of Jeremiah (third on the right), which stands on a base that shows the New York City skyline – Twin Towers included – being destroyed.

The nave is laid out west to east. The cathedral possesses two magisterial sets of 17th-century tapestries, which rotate on display in the Crossing. The Barberini Tapestries from Italy depict scenes from the life of Christ, while the Mortlake Tapestries, based on cartoons by Raphael, show the Acts of the Apostles. Installed in 1932, the largest stained-glass window in the country contains more than 10,000 individual pieces of glass. The design features an image of a red-robed Christ at the center, from which trumpet-bearing angels radiate outward to the prophets.

One of the most powerful organs in the world, the Great Organ was originally installed in 1911, then enlarged and rebuilt in 1952; it contains 8500 pipes arranged in 141 ranks. The 2001 fire damaged the instrument, but a careful five-year restoration brought it back – you can hear it roar above the choir during services and concerts. Behind the altar, in the Chapel of St Columba, is the silver triptych Life of Christ, carved by '80s pop artist Keith Haring (1958–90); it was the last work of art he produced just weeks before dying of an AIDS-related illness at the age of 31. Throughout the nave, keep an eye out for playful miniature ceramic figures in column niches – a 2015 gift from American sculptor Tom Otterness.

The cathedral is situated on a lovely 11-acre plot. On the south side of the building, you’ll find the whimsical Children’s Sculpture Garden (check out the idiosyncratic Peace Fountain, which shows the archangel Michael doing battle with Satan) and the Biblical Garden, containing plants mentioned in the Bible.