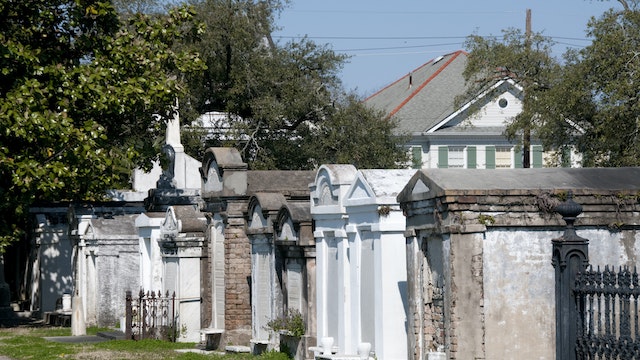 Of all the cemeteries in New Orleans, Lafayette exudes the strongest sense of subtropical Southern Gothic. The stark contrast of moldering crypts and gentle decay with the forceful fertility of the fecund greenery is incredibly jarring. It’s a place filled with stories – of German and Irish immigrants, deaths by yellow fever, social societies doing right by their dead – that pulls the living into New Orleans’ long, troubled past.

The cemetery is divided by two intersecting footpaths that form a cross. Look out for the structures built by fraternal organizations such as the Jefferson Fire Company No 22, which took care of its members and their families in large shared crypts. Some of the wealthier family tombs were built of marble, with elaborate detail rivaling the finest architecture in the district, but most tombs were constructed simply of inexpensive plastered brick.

Take a tour with the nonprofit Save Our Cemeteries, and the entire proceeds are used for cemetery restoration and documentation. Reservations are recommended because spots are limited, but tours need three people or more to depart. Tours meet at the Washington Ave entrance.

During the summer months, don't underestimate how big the cemetery is, and how hot the area can be. Take some water with you.

Editor's Note: As of this article's latest update in May of 2021, the cemetery is currently closed to the public while repairs and improvements are made. Call to check for details.

The cemetery was built in 1833 by the former City of Lafayette and filled to capacity within decades of its opening, before the surrounding neighborhood reached its greatest affluence. Indeed, not far from the entrance is a tomb containing the remains of an entire family that died of yellow fever. By 1872 the prestigious Metairie Cemetery in Mid-City had opened and its opulent grounds appealed to those with truly extravagant and flamboyant tastes.

In July 1995, author Anne Rice staged her own funeral here. She hired a horse-drawn hearse and a brass band to play dirges, and wore an antique wedding dress as she laid down in a coffin. The event coincided with the release of one of Rice’s novels.

Perched on the corner of Prytania St and Washington Ave, Still Perkin' is a great place to start or finish a visit to Lafayette Cemetery No 1. In addition to lattes and iced coffees, there’s a decadent selection of scones and other treats plus a few sandwiches and wraps. It’s in the Rink mini-mall.

Or, consider the legendary Creole restaurant, Commander's Palace, which is just across the street. You could also wander up to the old-school Verret's Lounge for a quick drink.