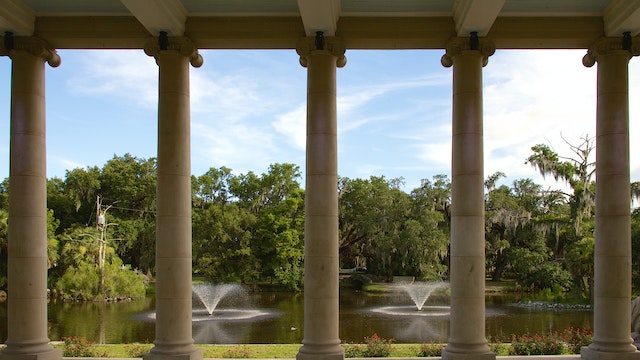 In many ways, City Park is a near-perfect expression of a local "park," in the sense that it is an only slightly tamed expression of the forest and Louisiana wetlands (Bayou Metairie runs through the grounds) that are the natural backdrop of the city. Golf courses mar this narrative, but there's still enough wild to get lost in.

Art- and nature-lovers could easily spend a day exploring the park. Anchoring the action is the stately New Orleans Museum of Art, which spotlights regional and American artists. From there, stroll past the whimsical creations in the Sydney & Walda Besthoff Sculpture Garden, then check out the lush Botanical Gardens. Kids in tow? Hop the rides at the Carousel Gardens Amusement Park or climb the fantastical statuary inside Storyland.

City Park occupies the site of the former Allard Plantation; much of the infrastructure and improvements, including pathways, bridges and art deco flair, were built by the Works Progress Administration (WPA) during the Great Depression. The arboreal life is magnificent and includes strands of mature live oaks – thousands of them, some as old as 600 years – along with bald cypresses, Southern magnolias and other species.

During Hurricane Katrina, nearby canals flooded and inundated more than 90% of the park in up to 8ft of salt water. Though the ground has recovered, many priceless trees were lost. One tree that wasn’t was the Singing Oak (or Singing Tree), which stands festooned with chimes, some up to 14ft in length. Standing under the tree during the slightest breeze is pretty magical.

Looking like a vague cross between Lenin’s tomb and a Greek temple, the New Orleans Museum of Art is one of the finest art museums in the South. There’s strong representation from regional and American artists, but the work of masters, such as Edgar Degas, who have passed through the city is also prominent.

Three of George Rodrigue's "Blue Dogs" – in red, yellow and blue – await your arrival in the pleasant Sydney & Walda Besthoff Sculpture Garden, which sits beside the New Orleans Museum of Art.

The garden opened in 2003 with pieces from the world-renowned Besthoff collection and today holds more than 60 pieces, dotted across 5 acres. Most are contemporary works by artists such as Antoine Bourdelle, Henry Moore and Louise Bourgeois.

The Botanical Gardens and Peristyle

The Botanical Gardens have been the site of many a New Orleans wedding, and in their green depths you'll find examples of flora from both around the world and across the backyard of Louisiana.

Anyone who doesn’t like the charmingly dated Carousel Gardens must surely have a heart of stone. The lovingly restored antique carousel is housed in a 1906 structure with a stained-glass cupola. In the 1980s, residents raised $1.2 million to restore the broken animals, fix the squeaky merry-go-round and replace the Wurlitzer organ.

The results are spectacular in a tweedy, tinkly kind of way. You can board the tiny City Park Railroad here as well, plus a little Ferris wheel, bumper cars and a tilt-a-whirl.

Storyland doesn't have rides, just fun statues of fairy-tale heroes and villains. If the characters seem strangely similar to Mardi Gras floats, it’s because they were created by master float-builder Blaine Kern. During the Christmas season it’s lit up like a Christmas tree and all very magical.

The Louisiana Children’s Museum recently built new digs in City Park. It's kind of a theme park for kids (albeit more educational). There’s giant bubble-blowing exhibits, play loading cranes, a book forest, a play shopping area, and plenty of other stuff that should appeal to any kid under 10.

The wildest section of the park is this scad of hardwood forest, where live oaks shade leafy underbrush and mushrooms peek out of the moist soil. Park your car in the lot off the Harrison Ave traffic circle, and you'll see a road that extends back into the forest; take any branching trail and get pleasantly lost.

The Popp Fountain is wonderful, and another impressive example from the Works Progress Administration. Promenades planted with perennials and 26 Corinthian columns surround the centerpiece of water erupting from a bronze base of cavorting dolphins.

The best spots for parking in City Park include the area in front of the New Orleans Museum of Art and the lot near Morning Call.

There are alligators here! If you're walking your dog or are near the water, keep an eye out. We're not kidding – local gators aren't common, but they're not unheard of. The waters in the park aren't suitable for swimming. See the above tip about alligators.

A few steps from the sculpture garden, take a break for coffee, beignets and gumbo at Morning Call, conveniently open 24/7.

Want a picnic lunch? Head to Canseco's on Esplanade Ave and grab something from their hot bar.