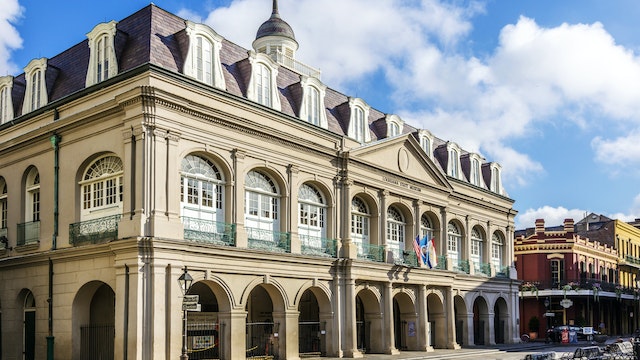 The former seat of government in colonial Louisiana now serves as the gateway to exploring the history of the state in general, and New Orleans in particular. It’s also a magnificent building in its own right; the elegant Cabildo museum marries elements of Spanish Colonial architecture and French urban design better than most buildings in the city. The diverse exhibits include Native American tools, "Wanted" posters for enslaved Africans who escaped, and a gallery’s worth of paintings of stone-faced old New Orleanians. Give yourself at least two hours to explore.

Fire has played an important role in this building's story, both in its 1795 construction (after the Great New Orleans Fire of 1788, which tore through much of the Quarter, cleared this site of its existing structure) and two centuries later, when the Cabildo was burned in 1988. Painstakingly restored, and returned to its original glory, the building is a treasure in its own right – not to mention the treasures that are on display inside its halls.

The exhibits do a good job of reaffirming the role the building and the surrounding region have played in history. Highlights include an entire section dedicated to the Battle of New Orleans, anchored by an enormous oil painting by 19th-century French artist Eugene Louis Lami; a historical Plan de la Nouvelle Orléans from 1744, showing a four-block-deep city; and the death mask of Napoleon Bonaparte.

The magnificent Sala Capitular (Capitol Room), a council room fronted by enormous windows giving sweeping views onto Jackson Square, was the most important room in Louisiana for decades. Civic functions and legal action were conducted here; this was the courtroom where Plessy v Ferguson, the 1896 case that legalized segregation under the "separate but equal" doctrine, was tried. The Sala now includes a comprehensive exhibition dedicated to the Louisiana Purchase.

American author William Faulkner wrote, "The past is never dead. It’s not even past." That quote only begins to hint at the troubled history of race relations in the South. The wing of the Cabildo dedicated to post–Civil War Reconstruction is as even-handed and thorough an attempt at explaining this difficult period and its consequences as we’ve seen, and should be of interest to both history enthusiasts and casual visitors alike.

Tips for visiting the Cabildo

Although the Cabildo is closed on Mondays, Friends of the Cabildo still offers walking tours, which are excellent.

Be sure to take a peek at Jackson Square out of the large windows on the 2nd floor.

Check online for current listings of events including concerts, yoga and more.

Make a day of it and have brunch at Court of the Two Sisters, a few blocks away on Royal St.

A little further on, grab a well-earned drink at Toulouse Dive Bar and shoot a game of pool.