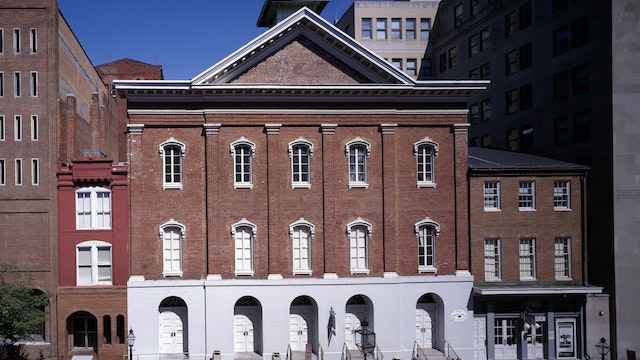 More than a museum, Mystic Seaport is a re-creation of an entire New England whaling village spread over 17 acres of the former George Greenman & Co Shipyard. To re-create the past, 60 historic buildings, four tall ships and almost 500 smaller vessels are gathered along the Mystic River. Interpreters staff the site and are glad to discuss traditional crafts and trades. Most illuminating are the demonstrations on such topics as ship rescue, oystering and whaleboat launching.

Visitors can board the Charles W Morgan (1841), the last surviving wooden whaling ship in the world; the LA Dunton (1921), a three-masted fishing schooner; and the Joseph Conrad (1882), a square-rigged training ship. The museum's exhibits include a replica of the 77ft schooner Amistad, the slave ship on which 55 Africans cast off their chains and sailed to freedom. (In the Steven Spielberg movie Amistad, the museum was used to stage many of the scenes that actually took place in Colonial New London.)

At the Henry B DuPont Preservation Shipyard, you can watch large wooden boats being restored. Be sure not to miss the Wendell Building, which houses a fascinating collection of ships' figureheads and carvings. Close by is a small 'museum' (more like a playroom) for children aged seven years and under. The seaport also includes a small boat shop, jail, general store, chapel, school, pharmacy, sail loft, shipsmith and ship chandlery.

If the call of the sea beckons during your visit, you can visit the Boathouse and captain your own sailboat. Rides are also available on the 20ft Crosby catboat Breck Marshall ($6); and full-day charters to Fishers Island are possible aboard the 23ft sailboat Calypso ($400 for up to six hours, June to October). Week-long teen charters, sailing programs and boat-building workshops are regular summer sellouts, so book well in advance.

The opening of the 5000-sq-ft Thompson Exhibition Building in 2016 makes the seaport a year-round destination and allows for traveling exhibits from around the world, such as the exhibition of JMW Turner watercolors from the Tate which were shown in 2018.