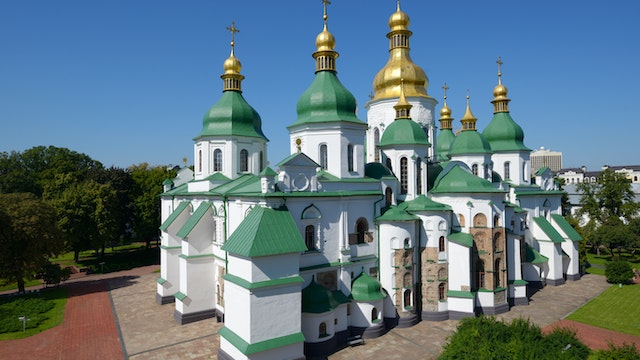 The interior is the most astounding aspect of Kyiv's oldest standing church. Many of the mosaics and frescoes are original, dating back to 1017–31, when the cathedral was built to celebrate Prince Yaroslav's victory in protecting Kyiv from the Pechenegs (tribal raiders). While equally attractive, the building's gold domes and 76m-tall wedding-cake bell tower are 18th-century baroque additions. It's well worth climbing the bell tower for a bird's-eye view of the cathedral and 360-degree panoramas of Kyiv.

Named after the great Hagia Sofia in Istanbul, St Sophia's Byzantine architecture announced the new religious and political authority of Kyiv. It was a centre of learning and culture, housing the first school and library in Kyivan Rus. Adjacent to the Royal Palace, it was also where coronations and other royal ceremonies were staged, treaties signed and foreign dignitaries received.

Each mosaic and fresco had its allotted position according to Byzantine decorative schemes, turning the church into a giant 3D symbol of the Orthodox world order. There are explanations in English of individual mosaics, but the one that immediately strikes you is the 6m-high Virgin Orans dominating the central apse. The Virgin Orans is a peculiarly Orthodox concept of the Virgin as a symbol of the earthly church interceding for the salvation of humanity. Having survived this long, this particular Orans is now thought indestructible by Orthodox believers. (Unesco was slightly less certain, adding the cathedral to its protective World Heritage list in 1990.)

Less obvious, but worth seeking out, are two secular group portraits of Yaroslav and family, one on either side of the central nave. Prince Yaroslav himself was buried here, but his remains are believed to have been smuggled into the US by a collaborationist priest, who left Kyiv with the retreating German army during WWII. The Ukrainian government is engaged in negotiations about their return. The prince's empty tomb can be found on the ground floor, in the far-left corner from the main entrance.

Other highlights of the cathedral include the cast-iron tile floors, which date from the 18th century; an awesome model depicting Kyiv at the time of the Kyivan Rus; and art galleries upstairs containing ancient icons and fragments of original frescoes rescued from nearby St Michael's Golden-Domed Monastery before the Soviets demolished it in 1937.

Additional museums on the cathedral grounds are of little interest. Just before the bell tower lies the ornate tomb of Kyiv Patriarch Volodymyr Romanyuk. Religious disputes prevented him from being buried within the complex.

In front of the cathedral complex on pl Sofiyska is a statue of Cossack hero Bohdan Khmelnytsky.