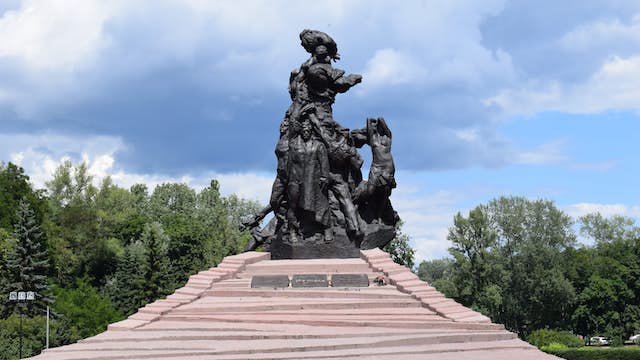 On 29 September 1941, Nazi troops rounded up Kyiv's 34,000-strong Jewish population, marched them to the Babyn Yar ravine and massacred them. Victims were shot and buried in the ravine, some of them still alive. Today the site is a sobering memorial marked by a poignant menorah.

The Nazis would kill many more Jews and non-Jews here in subsequent years. The entire story is told through an open-air alley of placards, in Ukrainian and English, near the northeast park entrance on vul Oleny Telihy.

The site has been mired in controversy over the years. Because of their own anti-Semitism, it took decades for the Soviets to recognise the Babyn Yar tragedy before they finally erected a monument in 1976. The monument, a nonsectarian creation comprised of choking figures, infuriated the Jewish community. It made no mention of Jews, only of 'Soviet victims of fascism', and was located well south of the ravine where the atrocities occurred.

It wasn't until after the Soviet Union collapsed that the Jewish community was given permission to erect their menorah near the actual killing site. From the menorah, several paths lead to points overlooking the ravine itself.

The Nazis ultimately turned this entire area into the Syrets concentration camp, killing thousands more people of all ethnic, religious and political backgrounds. The total number of people buried here is estimated at 100,000. Close to a dozen monuments commemorating various groups targeted by the Nazis – among them Russian Orthodox priests, Ukrainian nationalists, Romany people and female Ukrainian slave labourers who were shipped to Germany – are scattered around the unkempt park.

The controversial Soviet monument is in an adjacent park south of Dorohozhychi metro and vul Melnykova.