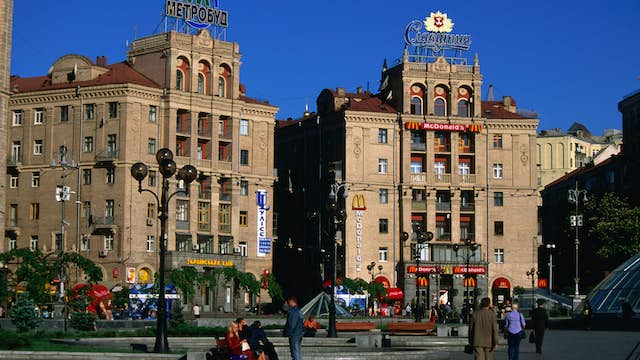 Be it celebration or revolution, whenever Ukrainians want to get together – and they often do – 'Maidan' is the nation's meeting point. The square saw pro-independence protests in the 1990s and the Orange Revolution in 2004. But all of that was eclipsed by the Euromaidan Revolution in 2013–14, when it was transformed into an urban guerrilla camp besieged by government forces. In peaceful times, Maidan is more about festiveness than feistiness, with weekend concerts and a popular nightly fountain show.

All streets in the centre seem to spill into maidan Nezalezhnosti, and with them spills a cross-section of Kyiv life: vendors selling food and souvenirs; teenagers carousing under the watchful gaze of winged-angel statues; skate rats and snake charmers; lovers and bums.

Yet the echo of revolution is omnipresent. Makeshift memorials on vul Instytutska serve as a sombre reminder of those slain in Euromaidan. Images of burning tyres and army tents from that fateful winter will forever linger in the Ukrainian conscience.