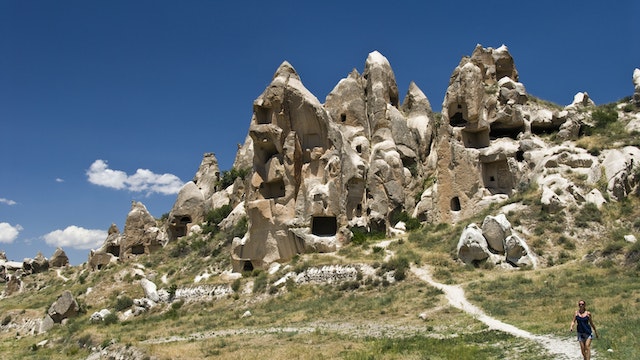 This Unesco World Heritage site is an essential stop on any Cappadocian itinerary. First thought to be a Byzantine monastic settlement that housed some 20 monks, then a pilgrimage site from the 17th century, this splendid cluster of monastic Byzantine artistry with its rock-cut churches, chapels and monasteries is 1km uphill from Göreme's centre.

The site's highlight – the Dark Church – has an additional entrance fee. Note that the ticket office closes at 4.30pm October to April.

From the museum ticket booth, follow the cobbled path until you reach the 11th-century Chapel of St Basil, dedicated to Kayseri-born St Basil, one of Cappadocia's most important saints. In the main room, St Basil is pictured on the left; a Maltese cross is on the right, along with St George and St Theodore slaying a (faded) dragon, symbolising paganism. On the right of the apse, Mary holds baby Jesus with a cross in his halo.

Nearby is the Chapel of St Barbara. Some art historians theorise that Byzantine soldiers carved out this 11th-century church, dedicated to their patron saint, who is depicted on the left as you enter. Look up at the ceiling and note the red ochre motifs – the middle one could represent the Ascension; above the St George representation on the far wall, the strange creature could be a dragon and the two crosses the beast's usual slayers.

Past the Chapel of St Barbara the lane loops down to the columned and nine-domed Apple Church, which contains well-preserved, colourful, professionally painted frescoes of biblical scenes as well as simple red-ochre daubs. The Ascension is pictured above the door while Christ Pantocrator is depicted on the church's central dome. The church's name is thought to derive from an apple tree that grew nearby or from a misinterpretation of the globe held by the Archangel Gabriel, in the third dome.

Heading uphill you come to the Snake Church, also called the Church of St Onuphrius, where St George's ubiquitous dragon-foe is still having a bad day. To add insult to fatal injury, the church got its current moniker when locals mistook the pictured dragon for a snake. The hermetic hermaphrodite St Onuphrius is depicted on the right, holding a genitalia-covering palm leaf. Straight ahead, the small figure next to Jesus is one of the church's financiers.

The small Pantocrator Chapel and Nameless Chapel (İzimsiz Şapel) with their simple red-ochre geometric decorations and Maltese crosses are a little further along the path as well as a series of caves thought to have served as refectory and kitchen areas with a rock-cut table in one cavern.

On the highest point of the path, head up the tunnel to the stunning, fresco-filled Dark Church, the most famous of the museum's churches. It takes its name from the fact that it originally had very few windows. Luckily, this lack of light preserved the vivid colour of the frescoes, which show, among other things, Christ Pantocrator, the Nativity, the Transfiguration, the Betrayal by Judas and the Crucifixion. The church was restored at great expense and the entrance fee is intended to limit visitor numbers to further preserve the frescoes.

Just past the Dark Church, the little Chapel of St Catherine contains frescoes of St George, St Catherine and the Deesis (a seated Christ flanked by the Virgin and John the Baptist).

Heading downhill, the 13th-century Sandal Church is named for the footprints marked in the floor, representing the last imprints left by Jesus before he ascended to heaven. Although the frescoes aren't as well preserved here, the colours are still vivid.The four gospel writers are depicted below the central dome; in the arch over the door to the left is the Betrayal by Judas.

The Rahibeler Monastery is at the bottom of the hill, just before you get back to the museum entrance area. It was originally several storeys high and it's posited by historians that a small community of nuns resided here during the 11th century. All that remains is a large plain dining hall and, up some steps, a small chapel with unremarkable frescoes, but the entire craggy structure is now cordoned off due to rock falls.

When you exit the Open-Air Museum, don't forget to cross the road to visit the Buckle Church, 50m down the hill towards Göreme and covered by the same ticket. This is one of Göreme's biggest and finest churches, with an underground chapel and fabulous restored frescoes painted in a narrative (rather than liturgical) cycle. Entry is via the barrel-vaulted chamber of the 10th-century 'old' chapel, with frescoes portraying the life of Christ. Behind it, the 'new' church, built less than 100 years later, is also alive with frescoes on a similar theme. The holes in the floor once contained tombs, taken by departing Greek Christians during Turkey's population exchange.

Note that photography is not allowed inside any of the churches.