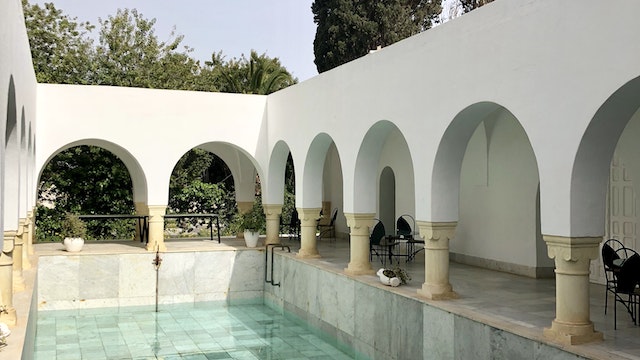 Built by Romanian millionaire George Sebastian in the 1920s, Hammamet’s International Cultural Centre used to be the ultimate party house. The whitewashed villa and lush landscaped gardens caught the eye of architect Frank Lloyd Wright, who supposedly said it was one of the most beautiful places he knew, but he'd be disappointed today, as the mansion has an air of neglect. The lack of signage means you'll be tipping a caretaker if you want to learn anything.

The main hall of the now state-owned manor is used as a temporary gallery for contemporary artworks and leads out to a huge black marble dining table next to a colonnaded swimming pool. Hidden in one of the back rooms is the odd baptistery-font-style four-seater bath surrounded by mirrored cupboards. Nazi commander Erwin Rommel got to enjoy the bath when he used the house as Axis headquarters during WWII, as did British Prime Minister Winston Churchill, who stayed here after the war to write his memoirs.

The 14-acre grounds also include a Greek-style amphitheatre, built in 1962, used every July and August to stage the Festival International de Hammamet, with entertainment ranging from classical theatre to Arab music. A raised boardwalk ambles past a grove of citrus and olive trees and ends at an 'eco museum' dedicated to Cap Bon's traditional farming techniques and irrigation methods. You can find the olive oil from these trees bottled and for sale at a few spots around the premises.

Though the Cultural Centre is mainly used for conferences and events, you can still wander through on any day.