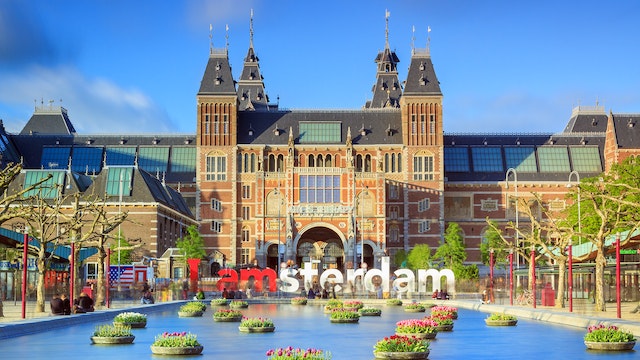 The Netherlands’ top treasure house, the Rijksmuseum (pronounced ‘rikes’), is among the world's finest art museums. With over 1.5km of galleries, it packs in around 8000 artworks with paintings by homegrown heroes Rembrandt, Vermeer and Van Gogh, as well as plenty of other masterpieces.

The museum is spread over four levels, from Floor O (the main atrium) to Floor 3; pick up a map from the information desk. You can see the highlights in a couple of hours, but you may want to allocate much longer to take it all in. There is a Michelin-starred restaurant on-site, plus a cafe, shop, library and garden to break up the visit.

It’s best to start your visit on Floor 2, which contains the highlights of the collection, with its Golden Age masterpieces in the Gallery of Honour. Intimate paintings by Vermeer and De Hooch allow insight into everyday life in the 17th century, while Rembrandt's The Night Watch (1642) is the rock star of the museum, with perennial crowds in front of it. Initially named Archers under the Command of Captain Frans Banning Cocq (the militia's leader), The Night Watch title was bestowed years later due to a layer of grime that gave the impression it was an evening scene. It has since been restored to its original colors.

You’ll find several Rembrandts on this floor, including his unflinching self-portrait as the Apostle Paul, and The Jewish Bride (1665) which impressed Van Gogh so much that he declared he would give up a decade of his life just to sit before the painting for a fortnight with only a crust of bread to eat.

Other highlights at the Rijksmuseum include The Merry Family (1668) by Jan Steen, who became renowned for painting chaotic households to convey moral teachings, and the popular Portrait of a Girl Dressed in Blue (1641) by Johannes Cornelisz Verspronck, depicting a child in her Sunday best.

Don’t miss Van Gogh’s Self-portrait (1887) on the first floor, as well as the Battle of Waterloo (1824) by Jan Willem Pieneman, the largest painting in the museum that takes up almost an entire wall.

Aside from the collection of masterpiece paintings, other must-sees include the Delftware (blue-and-white pottery); mind-blowing intricately detailed dollhouses; the Asian Pavilion with its first-rate artworks from China, Indonesia, Japan, India, Thailand and Vietnam; and Cuyper’s library, an Escher-like towering book-lined space – view it from the balcony on Floor 2.

The sculpture-studded gardens, the ‘outdoor gallery’, host big-name sculpture exhibitions at least once a year. You can stroll for free amid the roses, hedges and fountains. There’s also a cool greenhouse.

Stocking a great range of quirky items, Delftware, art prints, books and more, the museum shop is perfect for browsing and picking up a souvenir or gift for someone.

History of the Rijksmuseum

The Rijksmuseum was originally conceived to hold several national and royal collections and was inspired by French museums such as the Louvre. Its precursor, The National Art Gallery, was founded in 1800 and was located in Den Haag (The Hague). In 1808, Napoleon moved the national art collection to the Royal Palace on Dam Square in Amsterdam, the country’s new capital. Here they joined some of the country’s national artistic treasures, such as The Night Watch by Rembrandt.

The collection was then moved several times before a contest was held to find someone to design the building that would be suitable to house these grand artworks. Architect Pierre Cuypers – who was the principal designer for Centraal Station too – was chosen to design the building and construction began in 1876. The result is a stunning mix of neo-Gothic and Dutch Renaissance styles. The museum officially opened to the public in 1885.

The museum is open daily from 9am-5pm, including national holidays. To avoid the biggest crowds, arrive before 10am or after 3pm.

Tickets need to be booked on the website in advance to reserve a timeslot. Entry costs €20 for adults and those 18 years and under go free. I Amsterdam and Museumkaart cardholders also get in free.

Treat yourself to a gourmet lunch or dinner at Rijks, the Michelin-starred museum restaurant, set in a beautiful space with huge windows and high ceilings.  It’s open Wednesday to Sunday for lunch, and Tuesday to Sunday for dinner.

If you fancy something a little less formal, there’s a cafe on the mezzanine in the great entrance atrium that serves light lunches.

Black-and-white awnings and a wrought-iron balcony set the scene at l'Entrecôte et les Dames, which has a simple menu of steak or fish. Go for the entrecôte (premium beef steak) at dinner or a steak sandwich for lunch, and save room for scrumptious desserts.