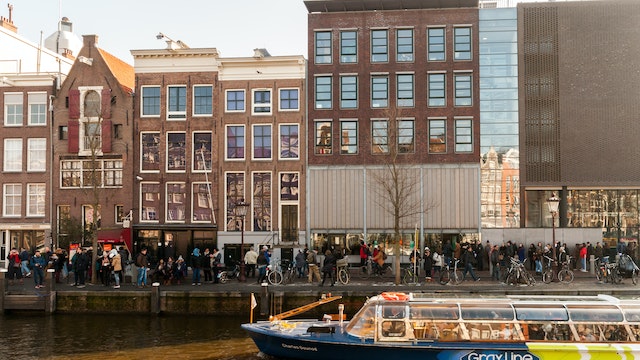 Visiting the Anne Frank Huis is one of Amsterdam's most profound experiences. Tragically, of the 107,000 Jewish adults and children deported from the Netherlands to concentration camps during WWII, only 5000 survived.

Entering the "Secret Annexe" where the teenaged girl and her family desperately hid from the Nazis for over two years until their capture puts the Holocaust's atrocities into acutely human scale, intimately personalizing the war's catastrophic effects. Standing in these sombre, airless rooms and viewing the diary Anne wrote while hiding here is impossible to forget.

History of Anne Frank and her family

Born in Germany in 1929, Anne Frank, along with her sister Margot and parents Otto and Edith, fled when Hitler came to power in 1933. The family settled in Amsterdam, where Otto Frank founded companies selling pectin, meat, and sausage seasoning in offices and warehouses on Amsterdam's Prinsengracht canal.

Following Germany's invasion of the Netherlands in 1940, Otto and his colleague Hermann van Pels – assisted by helpers who would provide invaluable supplies throughout their stay – set up a hiding place in a "Secret Annexe" of Otto's work premises in spring 1942. For Anne's 13th birthday in June that year she received her red plaid diary. In July, when Margot was summoned to Nazi Germany, the family took refuge in the hideout.

The Franks were soon joined by Hermann van Pels, his wife Auguste and their son Peter, and later by another friend, dentist Fritz Pfeffe. Here they lived in uncertainty, with blacked-out windows and daytime silence, for what would be just over two years. Anne spent the days writing in her diary about the experience and her hopes and dreams for the future.

In August 1944, however, the Gestapo arrived when the hiders were mysteriously betrayed. Their furniture was seized by the Nazis and all eight were deported. Anne died in the Bergen-Belsen concentration camp in March 1945 just weeks before its liberation, aged only 15. Her diary was salvaged from the ransacked annexe, and published by her father, Otto, the sole survivor, immortalizing Anne's story and life.

The diary has since sold millions of copies and been translated into more than 70 languages; copies are on sale at the museum's bookshop.

What to see at Anne Frank Huis

Inside, within the modern shell's interior that now contains the house, the lower levels present history using interactive technology, such as WWII newsreels overlaid with narration of Anne’s diary. You can view the offices of Otto Frank's business partner and other colleagues who helped the hiders, with displays of personal effects and documents.

Passing the bookcase that swings open on hinges and going inside the "Secret Annexe" of the achterhuis (rear house) provides a sharp contrast. These two floors, below the attic and above the office kitchen, feel frozen in 1942. Anne's pictures of Hollywood stars and Dutch royals still adorn the walls of her small bedroom, which she shared with Fritz Pfeffer. In the mornings, the families could not use the bathroom to avoid alerting the warehouse workers to their presence; their midday meal was taken with their helpers only when the staff went home for lunch.

At Otto's request, the annexe remains unfurnished, but after the museum opened in 1960, he had models made of the house that convey the cramped conditions of the carefully concealed layout.

After visiting the annexe, you can view more haunting videos in the front house, along with exhibits including Anne's diary, alone in a glass case.

Capacity is limited at the small museum. It's compulsory to purchase tickets in advance online, when you need to choose a timeslot for your visit. Be aware that tickets can't be changed or refunded.

Evocative audio guides in multiple languages are included in admission. While there are no guided tours, when booking your tickets, you can add on an "introductory program" (available in English, not suitable for under 10s). This 30-minute talk prior to your museum visit equips you with an in-depth understanding of the house, the war and persecution of the Jewish people.

The Anne Frank Huis is open daily with exceptions noted on its website. Evenings tend to be quietest, often making this the best time to visit.

How long does it take to visit?

Allow around an hour to visit Anne Frank Huis (plus an extra half-an-hour if you've booked an "introductory program"). Once you've arrived for your ticket's time slot, you're free to take as much time as needed.

Photography is banned to preserve the house's exhibits and contemplative atmosphere.

Close to the Anne Frank Huis in the elegant Western Canal Ring, 't Hotel, in a 17th-century canal house, is a boutique top-end address. In the nearby Jordaan neighborhood there are some great mid-range places to stay like the welcoming Linden Hotel.

Good cheap hotels near the Anne Frank Huis include the train-themed A-Train Hotel, located opposite Centraal Station in the Medieval Center, which also has plenty of hostels.

The Anne Frank Huis has a museum cafe overlooking the Prinsengracht.