in Nieuwmarkt, Plantage & the Eastern Islands 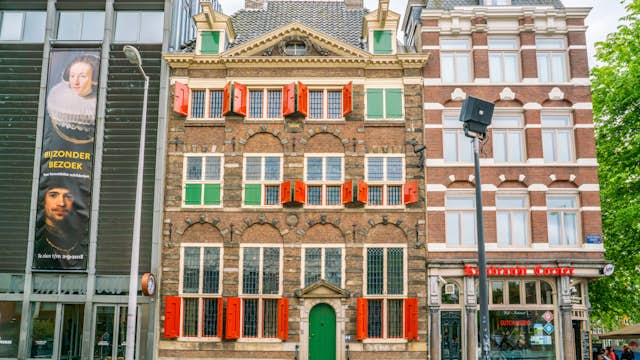 Housed in Rembrandt's former home on lively Jodenbreestraat, this evocative museum provides an unparalleled insight into one of the Netherlands’ greatest artistic geniuses. This is where the master painter spent his most successful years, working on major commissions such as The Night Watch and running his painting studio.

The interior has been meticulously reproduced, so you feel like you are stepping back into the 17th century as you make your way through the various rooms of the house.  The museum has a near-complete collection of Rembrandt’s etchings – about 260, though not all are always on display – as well as a few original copper platings.

The museum occupies the three-story canal house where the artist lived at the height of his success. It dates from 1606. Rembrandt bought it in 1639 for a fortune, made possible by his wealthy wife, Saskia van Uylenburgh. He ran the largest painting studio in the Netherlands here between 1639 and 1658.

However, the house was to be his ultimate financial undoing. As his work fell out of fashion, he was unable to pay the mortgage, and in 1656 the house and its effects were sold to compensate his creditors. It’s thanks to the debt collectors’ itemized list that the museum’s interior has been able to be reproduced so authentically. Rembrandt spent the rest of his life in cheaper digs in the Jordaan district.

Over the years the house fell into a state of severe dilapidation before it was decided that it would be turned into a museum to show the artist’s collections of drawings and etchings. It underwent restoration to bring it back to its former glory between 1908 and 1911. The Museum het Rembrandthuis was officially opened by Queen Wilhelmina in June 1911.

On the ground floor is Rembrandt’s living room and bedroom, including the type of box-bed he slept in, fashionable at the time as it was thought that sleeping sitting up prevented death during the night. The ground floor also has an anteroom where he received his clients. Its walls are covered with paintings by Rembrandt’s teacher, his pupils and his contemporaries.

Upstairs is the light-filled studio, laid out as though he has just nipped out for a snack. Across the hall is his ‘Cabinet’, a room crammed with curiosities that he had collected, and the Print Room ­­– a small room devoted to his etchings.

Tickets, which include an audio guide, are priced at €15 for an adult, €10 for a student and €6 for children aged six to 17 years. Kids under six go free.

While the museum doesn’t attract lengthy queues nor get as packed out as other big-hitters in town, it’s still a good idea to book ahead online to reserve a timeslot. This gives you a dedicated time to enter the museum, but visitors are welcome to stay as long as they like.  Allow at least an hour for your visit.

Discounted entry to Rembrandthuis is available for those with the Museumkaart (Netherlands Museum Pass) or the I Amsterdam City Card.

You can purchase the Museumkaart over the counter at the 41 participating museums. The I Amsterdam City Card is available at the I Amsterdam store at Centraal Station, some visitor centers and select hotels throughout the city.

Don’t forget to take your card with you to show at the museum.

The museum is open from 10am to 6pm Tuesday to Sunday. Etchings demonstrations on the oak press take place several times a day; call ahead to check times.

As the museum is housed in a tall canal house, the space is narrow and can sometimes feel a bit busy. Try visiting either early in the morning or later in the afternoon to avoid the worst of the crowds. Generally, however, it’s not a problem.

Linger over a canal-side drink and snack at the charming 17th-century brown cafe De Sluyswacht, a delightfully wonky building right on the waterfront. The canal-side terrace with views of the 16th-cenutry tower Montelbaanstoren is a charming spot to relax with a Dutch or Belgian beer and bar snacks, including bitterballen (deep-fried meatballs), chips and toasties.

High-ceilinged TisFris floods with light through huge plate-glass windows and has outdoor seating for sunny days. It's ideal for a drink or a light lunch, such as warm goat's cheese and walnut salad, tuna melt, beef or veggie burger, or an open sandwich.

Great when you need your cockles warmed, Soup en Zo is part of a chain that serves delicious fresh soups of the day, which may include a creamy sweet potato with coconut or a hearty lentil beef, as well as salads (en zo means 'and so on' in Dutch).