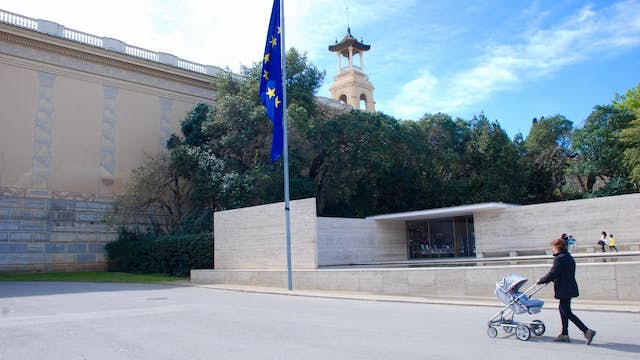 Designed in glass, steel and various marbles in 1929 by Ludwig Mies van der Rohe (1886–1969) for the World Exhibition, this curious work of artful simplicity is emblematic of the Modernisme movement, and has inspired several generations of architects. It was removed after the show and reconstructed only in the 1980s, after been consistently referred to as one of the key works of modern architecture. That said, unless you're an avid architecture fan, there isn't much to see beyond the building's exterior.

The Pavelló has been the subject of many studies and interpretations and reflects Mies van der Rohe's originality in the use of materials – he admired their visual rigour and precision, and their embodiment of modernity.

Mies van der Rohe also designed the Barcelona Chair for the pavilion, an iconic piece of furniture that can be seen in design-conscious spaces across the world today. You'll also see a copy of the graceful statue Alba (Dawn) by Berlin sculptor Georg Kolbe (1877–1947) in one of the exterior areas.