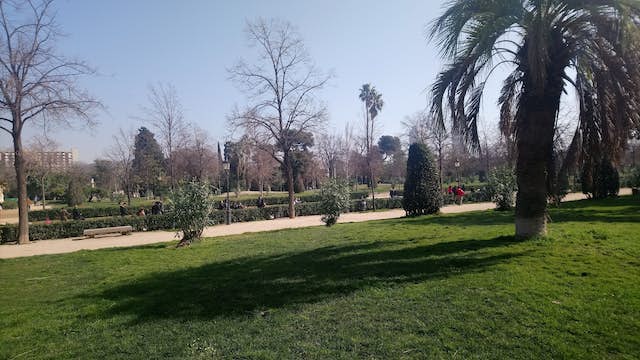 Come for a stroll, a picnic, a lake boat ride, a tour of Catalonia’s parliament or to marvel at the swirling waterfall-fountain in which Gaudí had a hand. This is the city's most central green lung, born in the mid-19th century on the former site of the much-hated huge fortress (La Ciutadella) on the eastern side of La Ribera.

After the War of the Spanish Succession, Felipe V razed a swath of La Ribera to build the Ciutadella fortress, designed to keep watch over Barcelona. It became a symbol of everything Catalans hated about Madrid and the Bourbon kings, and was later used as a political prison. Only in 1869 did the central government allow its demolition; the site was turned into a park and adapted for Barcelona's 1888 Universal Exposition by Josep Fontserè.

The monumental cascada (waterfall) near the Passeig de Pujades park entrance, created between 1875 and 1881 by Fontserè with the help of an enthusiastic young Gaudí, is a dramatic combination of statuary, rugged rocks, greenery and thundering water – all of it perfectly artificial. Topped by a golden statue of the Roman dawn goddess Aurora, it was inspired by Rome's Trevi Fountain. The bandstand opposite commemorates Sonia Rescalvo, a trans performer murdered here in 1991 by a group of Neo-Nazis.

To the southeast, in what might be seen as an exercise in black humour, the fort’s former arsenal now houses the Parlament de Catalunya. You can join free 45-minute guided tours, in a range of languages, with at least two days' advance booking (online). The building is only open for independent visiting on 11 September from 10am to 7pm. On show to the public are the sweeping Escala d’Honor (Stairway of Honour) and the several solemn halls that lead to the Saló de Sessions, the semicircular auditorium where parliament sits. In the lily pond at the centre of the garden in front of the building is a statue of a seemingly heartbroken woman, Desconsol (Distress; 1907), by Josep Llimona.

The western Passeig de Picasso side of the park is lined with several buildings constructed for, or just before, the Universal Exhibition. The medieval-looking caprice at the top end, the Castell dels Tres Dragons, is the most engaging (though it was closed for renovations at research time). Domènech i Montaner put the ‘castle’s’ trimmings on a pioneering steel frame. The coats of arms are all invented and the whole building exudes a teasing, playful air. It was used as a cafe-restaurant during the Universal Exhibition.

To the south is an elaborate greenhouse, L’Hivernacle, followed by the former geology museum and L'Umbracle, a palm house. On Passeig de Picasso itself lies Antoni Tàpies’ typically impenetrable 1983 Homenatge a Picasso: water runs down the panes of a glass box full of bits of old furniture, steel girders and ropes and sheets, surrounded by a shallow pool.

Northwest of the park, Passeig de Lluís Companys is capped by the Modernista Arc de Triomf, designed by Josep Vilaseca as the exhibition's main entrance, with unusual earthy-red Mudéjar-style brickwork; Josep Llimona did the main reliefs. Just what the triumph was eludes us, especially since the exhibition itself was a commercial failure. It is perhaps best thought of as a bricks-and-mortar embodiment of the city’s general fin de siècle feel-good factor.