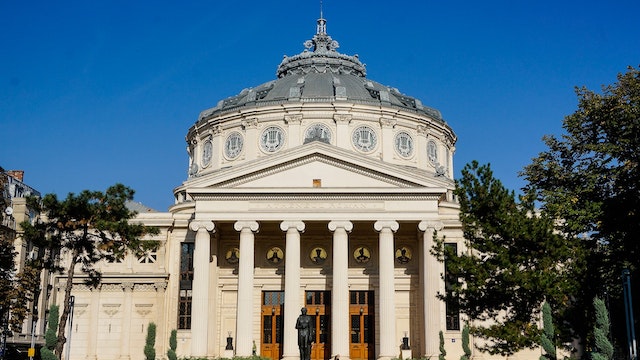 The exquisite Athenaeum is the majestic heart of Romania’s classical-music tradition. Scenes from Romanian history are featured on the interior fresco inside the Big Hall on the 1st floor; the dome is 41m high. A huge appeal dubbed ‘Give a Penny for the Athenaeum’ saved it from disaster after funds dried up in the late 19th century. Today it’s home to the George Enescu Philharmonic Orchestra and normally only open during concerts, but you can often take a peek inside.

The peristyle is adorned with mosaics of five Romanian rulers, including Moldavian prince Vasile Lupu (r 1512–21), Wallachian Matei Basarab (r 1632–54) and King Carol I (r 1881–1914). It was built in 1888, and George Enescu made his debut here in 1898, followed five years later by the first performance of his masterpiece, Romanian Rhapsody.

The George Enescu Philharmonic offers a wide array of classical-music concerts from September to May as well as a number of one-off musical shows and spectacles throughout the year. Buy tickets at the venue box office. Tickets go on sale Tuesday of the week a concert is taking place.