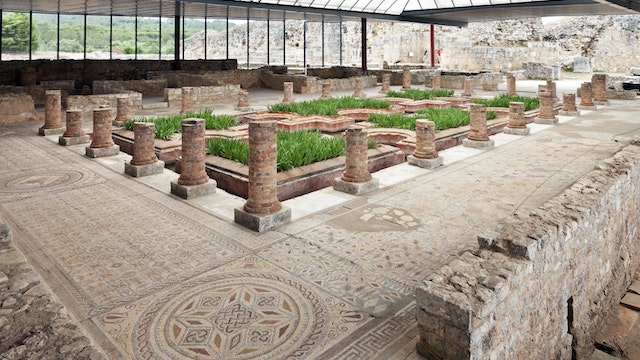 Set in the lush countryside southwest of Coimbra, this is Portugal’s largest and most impressive Roman site. Ancient Conímbriga was an important city in the Roman province of Lusitania and its ruins are extensive and wonderfully well preserved. Highlights include villas paved with elaborate floor mosaics – in particular the Casa dos Repuxos (House of Fountains) – and a 3rd-century defensive wall.

To get your head around Conímbriga's fascinating history, start (or finish) at the small museum near the entrance. Here you can browse finds unearthed at the site, including mosaics, sculptural fragments, coins, jewellery and everyday household items. There’s also a scale model of the forum which puts flesh on the skeletal remains you’ll see outside.

Conímbriga’s origins date to Celtic times (briga is a Celtic term for a defended area). But it was under the Romans, who arrived in the 2nd century BC, that it blossomed, thanks, in part, to its strategic position on the main route between Lisbon (Olisipo) and Braga (Bracara Augusta). After a golden age in the 1st and 2nd centuries, it eventually fell prey to barbarian attacks and, in 468 AD, it was captured by Germanic Suebi forces. Many citizens fled to nearby Aeminius (Coimbra) – thereby saving the city from destruction.

As you enter the ruins, you’ll soon find a massive wall rising in front of you. Dating to the 3rd century, this was built to keep out the by-now threatening barbarians and originally ran right through the city centre – much of the city’s residential area was simply abandoned.

Under the walls are a series of mosaic-floored villas, including the Casa dos Esqueletos (House of Skeletons) and Casa da Cruz Suástica (House of the Swastika) – to the Romans the swastika was a symbol of good luck. Over the wall, the Casa de Cantaber was the city’s largest private villa.

You’ll find the most impressive mosaics in the 1st-century Casa dos Repuxos. These vivid illustrations, set around a small central garden, depict the four seasons and various hunting scenes.

Other highlights include the remnants of the Grandes Termas do Sul (Great Southern Baths) one of the city’s several baths complexes; part of a 3km-long aqueduct; and the forum, which was originally surrounded by covered porticoes.

To get to the site by public transport, Transdev runs buses from near Coimbra A station to the ruins (€2.55, 45 minutes, three times daily). You’ll need to check the precise hours, though, as they change seasonally. Coimbra’s turismo can provide timetables.