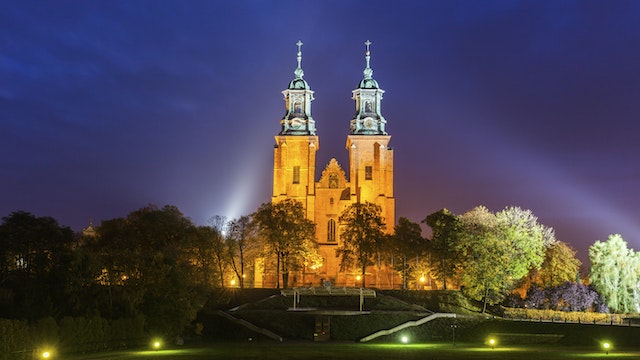 Gniezno’s history and character are inextricably intertwined with its cathedral, an imposing, double-towered brick Gothic structure. The present church was constructed after the Teutonic Knights destroyed the previous Romanesque cathedral in 1331. Chapels sprouted up around it, and the interior was redecorated in successive styles. After considerable damage in WWII, it was rebuilt according to the original Gothic structure. You can climb the tower for city views. The audio guide takes in the cathedral, tower, crypt and Romanesque bronze doors.

Its focal point is the elaborate silver sarcophagus of St Adalbert, which is in the chancel. The baroque coffin was the work of Peter van der Rennen and was made in 1662 in Gdańsk. It’s topped with a semi-reclining figure of the saint, who looks remarkably lively considering his unfortunate demise.

Adalbert was a Bohemian bishop who passed through Gniezno in 997, on a missionary trip to convert the Prussians, a heathen Baltic tribe inhabiting what is now Masuria in northeastern Poland. The pagans were less than enthusiastic about accepting the new faith and terminated the bishop’s efforts by cutting off his head. Bolesław Chrobry recovered the bishop’s body, paying its weight in gold, then buried it in Gniezno’s cathedral in 999. In the same year, Pope Sylvester canonised the martyr. This contributed to Gniezno’s elevation to an archbishopric a year later, and also led to the placing of several important memorials to the saint in the church.

One example is the pair of Romanesque bronze doors from around 1175, in the back of the right-hand (southern) aisle, at the entrance from the porch. Undeniably one of the best examples of Romanesque art in Europe, the doors depict, in bas-relief, 18 scenes from the life of St Adalbert.

The nearby entrance in the back wall of the church leads downstairs to the basement, where the relics of the previous Romanesque cathedral can be seen, along with the Gothic tombstones of the bishops.

Also on this back wall are two carved tombstones. To the left is the red-marble tomb of Primate Zbigniew Oleśnicki, attributed to Veit Stoss, and to the right is the late-15th-century bronze tomb of Archbishop Jakub from Sienna. Also note an expressive wooden crucifix from around 1440, placed high on the rood beam at the entrance to the chancel.

All along the aisles and the ambulatory are chapels, built from the 15th to 18th centuries, and separated from the aisles by decorative wrought-iron screens. There are 17 screens in all, ranging in style from Gothic and Renaissance to baroque, and constituting one of the most beautiful collections of its kind to be gathered in a single church in Poland. Inside the chapels are some fine tombstones, altarpieces, paintings and wall decorations – well worth a closer look.

One interesting modern artwork sits in the body of the church: a statue of Cardinal Stefan Wyszyński, the Polish primate credited with persuading the Soviets to relax their antireligious stance during the communist era. The panelled piece shows various scenes from the cardinal’s eventful life and career.

Unless you attend Holy Mass, visiting the cathedral itself on Sunday is very limited. Admission for the doors and to the basement are with a Polish speaking guide.