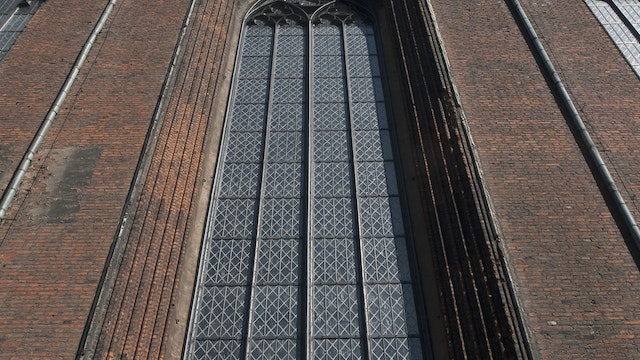 Dominating the heart of the Old Town, St Mary’s is often cited as the largest brick church in the world, its massive 78m-high tower dominating the Gdańsk cityscape. Begun in 1343, the building reached its present proportions in 1502. The high altar has a Gothic polyptych from the 1510s, with the Coronation of the Virgin depicted in its central panel. Don't miss the 15th-century astronomical clock in the northern transept, and the church tower (a climb of 405 steps).

The church’s elephantine size is arresting and you feel even more antlike when you enter the building. Illuminated with natural light passing through 37 large windows, the three-naved interior, topped by an intricate Gothic vault, is bright and spacious. It was originally covered with frescoes, the sparse remains of which are visible in the far right corner.

At first sight, the interior of the church looks almost empty, but walk around its 30-odd chapels to discover how many outstanding works of art have been accumulated. In the floor alone, there are about 300 grave slabs. In the chapel at the back of the northern aisle is a replica of Memling’s The Last Judgment – the original is in the National Museum’s Department of Early Art.

The most recent addition is the simple shrine to Paweł Adamowicz, the Gdańsk mayor who was stabbed to death at a charity event in 2019. The shrine contains his ashes.