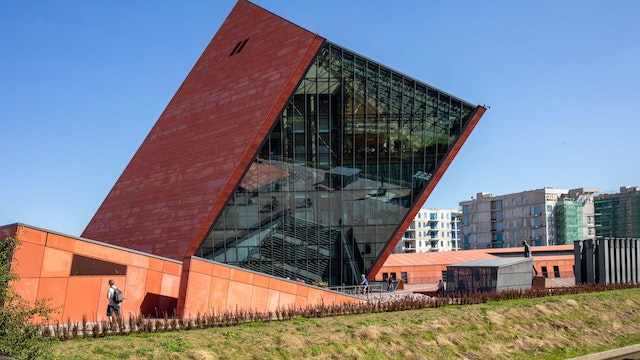 Opened in 2016, this striking piece of modern architecture is a bold addition to the northern end of Gdańsk's waterfront. It has rapidly become one of Gdańsk's must-visit attractions, tracing the fate of Poland during the world's greatest conflict and focusing on the human suffering it caused. Few leave unmoved. Covering 5000 sq metres, an absolute minimum of three hours is needed to do the main exhibition justice. Note that the museum is not suitable for children of any age.

The museum is divided into 18 sections, each one looking at an aspect of WWII and arranged (mercifully) in chronological order. Free maps are handed out with your ticket. Things kick off with the causes of the war – Nazi propaganda posters – and end with the Cold War – Communist propaganda posters. In between particularly striking exhibits include a huge mock-up of an interwar Warsaw street, the Holocaust section with its hundreds of Jewish faces rising 7m to the ceiling, a Sherman tank, an interesting section on meetings between the allies in Tehran, Casablanca, Moscow and Yalta and a massive, film-set-like bombed Warsaw courtyard complete with Russian tank. Room after room of uniforms, weapons, maps, documents and harrowing footage, all with brief explanations in English, will take up most of your time – you could literally spend an entire day here.

Little things to look out for along the way are the Nazi Christmas decorations bearing little swastikas, an Oscar-nominated film called Siege, shot by a US journalist in the first days of the Nazi invasion of Poland, personal objects belonging to both sides in the siege of Leningrad, artefacts from the Katyń massacre site and the radios sold in Czechoslovakia bearing little stickers promising the death penalty for listening to the BBC. There's also a section dedicated to Polish resistance, but surprisingly little about Gdańsk itself.

The building itself – all bare concrete painted black and grey – creates a heavy, sombre atmosphere. Many visitors leave visibly dazed, so powerful is the story this superb museum tells.

Only 200 visitors an hours are permitted to enter the Museum of WWII so to avoid the queues, make sure you buy your ticket in advance online. The museum is free on Tuesdays but the 200-visitor limit still applies and tickets are sold on a first-come-first-served basis. Get there early.