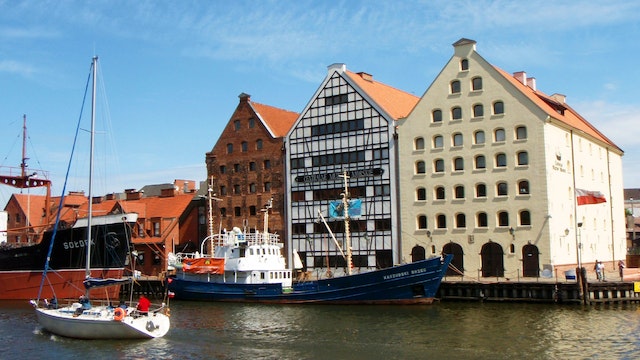 This is a sprawling exhibition covering Gdańsk's role as a Baltic seaport through the centuries. The headquarters, the multimillion-euro Maritime Cultural Centre, has a permanent interactive exhibition 'People-Ships-Ports'. Other exhibitions (which can be visited individually with separate tickets) include the MS Sołdek, the first vessel to be built at the Gdańsk shipyard in the postwar years, and the Żuraw, a 15th-century loading crane that was the biggest in its day. The granaries across the river house more displays.

The granary exhibits on Ołowianka Island illustrate the history of Polish seafaring from the earliest times to the present day. They include models of old sailing warships and ports, a 9th-century dugout, navigation instruments, ships’ artillery, flags and the like.

Another interesting exhibit is a collection of salvaged items from the General Carleton, a British ship that mysteriously disappeared in the Baltic in 1785.

The museum's ferry service (per trip 1.50zł, free with the ticket for all sites), shuttles between the crane and the island every 15 minutes.