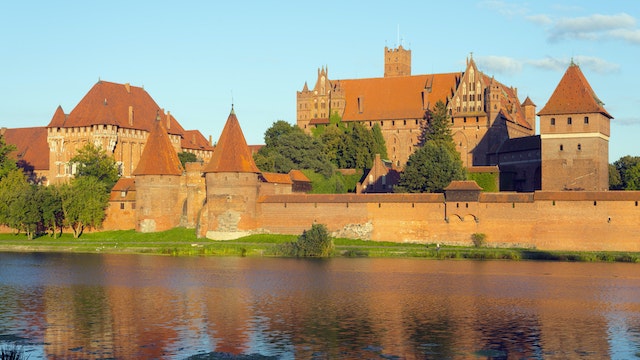 Malbork’s blockbuster attraction is its show-stoppingly massive castle sitting on the banks of the sluggish Nogat River, an eastern arm of the Vistula. The construction of Marienburg (Fortress of Mary) was begun by the Teutonic Knights in the 13th century and was the headquarters of the order for almost 150 years; its vast bulk is an apt embodiment of its weighty history. Visits are by self-guided tour with audio guide. Allow at least three hours to do the place justice.

The immense castle took shape in stages. First was the so-called High Castle, the formidable central bastion that was begun around 1276. When Malbork became the capital of the order in 1309, the fortress was expanded considerably. The Middle Castle was built to the side of the high one, followed by the Lower Castle still further along. The whole complex was encircled by three rings of defensive walls and strengthened with dungeons and towers. The castle eventually spread over 20 hectares, making it the largest fortress built anywhere in the Middle Ages.

The castle was seized by the Polish army in 1457, during the Thirteen Years’ War, when the military power of the knights had started to erode. Malbork then became the residence of Polish kings visiting Pomerania, but from the Swedish invasions onwards it gradually went into decline. After the First Partition in 1772, the Prussians turned it into barracks, destroying much of the decoration and dismantling sections of no military use.

In the 19th century the Marienburg was one of the first historic buildings taken under government protection, becoming a symbol of medieval German glory. Despite sustaining damage during WWII, almost the entire complex has been preserved, and the castle today looks much as it did six centuries ago, dominating the town and the surrounding countryside. The best view is from the opposite side of the river (you can get there via the footbridge), especially in the late afternoon when the brick turns an intense red-brown in the setting sun.

The visitor experience has been much improved recently with a new, chattier style of audio guide that works using GPS, a set route (no more getting lost and seeing only half the rooms) and several new exhibitions. The ticket office has left-luggage lockers, toilets and refreshments.

The entrance to the complex is from the northern side, through what used to be the only way in. From the main gate, you walk over the drawbridge, then go through five iron-barred doors to the vast courtyard of the Middle Castle.

On the western side (to your right) is the Grand Masters’ Palace, which has some splendid interiors including the kitchen with its 6m-wide fireplace and the Great Refectory, the largest chamber in the castle at 450 sq metres. The remarkable ceiling has its original palm vaulting preserved. Peek into the Grand Master's private loo before heading to the other side of the courtyard where there's a collection of period weapons and armour on display and an excellent Amber Museum – the latter would be a major place of interest in its own right, were it anywhere else. Amber was an important source of revenue for the Teutonic Knights – they controlled the entire Baltic coast where it is found. The tour then continues to St Anne's Chapel where 12 Grand Masters were buried.

The clever audio guide then leads you to the High Castle, over another drawbridge and through a gate to a spectacular arcaded courtyard that has a reconstructed well in the middle. This was the monastical part of the castle where monks would sit in session in the Chapter House before heading for their meat and mead in the striking refectory. The mock-up of the monks' kitchen is an aromatic affair with nary a potato or tomato in sight. Another memorable halt is the gdaniska, the knights’ loo perched high atop its own special tower and connected to the castle by a walkway. Perhaps it was one of the order who coined the phrase ‘long drop’ as he reached for the cabbage leaves they used for toilet paper.

One of the most striking interiors here is St Mary’s Church, accessed through a beautiful Gothic doorway, known as the Golden Gate. This is where the brothers would have met to pray every three hours, 24/7, but it was the part most damaged during the bombardment of 1945. Renovation ended in 2016, the walls left as bare brick as a powerful reminder of the Red Army shells.

Throughout the castle look out for the interesting underfloor heating system in many of the rooms and the little Gothic stucco figures pointing the way to the nearest WC. New exhibitions along the way examine conservation efforts over the last 200 years, oriental weaponry and Malbork under the Polish Crown.