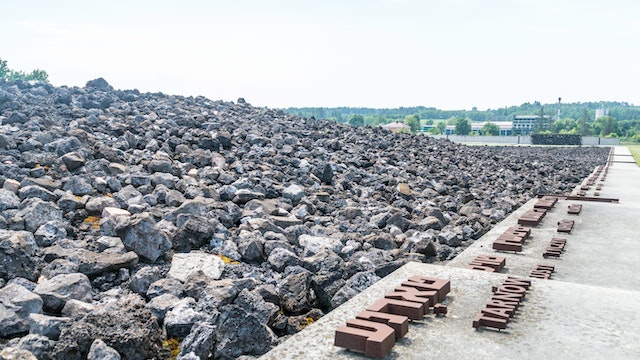 This subdued memorial and museum bears witness to the 600,000 Jews killed here in 1942 by the Nazis as part of their ‘Operation Reinhard’, the German plan to eliminate the Jewish population of occupied Poland. There were only two known survivors from Bełżec. The memorial, moving in its simplicity, covers the surprisingly small site of the original camp. Children under 14 are not permitted into the museum, which while small, is very well done. Plan on spending one to two hours.

Trains brought an average of 2000 people a day to Bełżec from March to December 1942. Here, like at Sobibór and Treblinka, there was no ‘selection’ process, only a miniscule chance for the prisoners to work, and crucially no chance for them to survive. In most instances, the victims were simply transported to the camps, off-loaded, stripped of their belongings, separated from their loved ones, undressed and gassed. Few people lived more than an hour after arriving at Bełżec. The memorial today covers the extent of the original camp. It's sobering to see how little space (and few people – the Germans and their Ukrainian guards never numbered more than about 120) was needed to kill so many.

The memorial includes some of the tracks used by the trains that brought people here (the same line can be seen outside the gates today). Visitors walk along a short path that is the same route as the Jews took to the gas chamber. The walls steadily grow taller – behind them are the ashes of the dead – until the sky itself is blotted out.

The small museum is excellent and was developed with the United States Holocaust Memorial Museum. It explains the workings of the camp, but devotes most of its space to humanising some of those who died here. Quotes from Rudolf Reder, the one survivor able to document his time at Bełżec, are searing. Another section is devoted to the significant yet futile efforts made by Jewish organisations to alert Allied leaders as early as 1942 about the death camps. Be sure to buy the Short Guide pamphlet (5zł), which provides vital context for a visit.