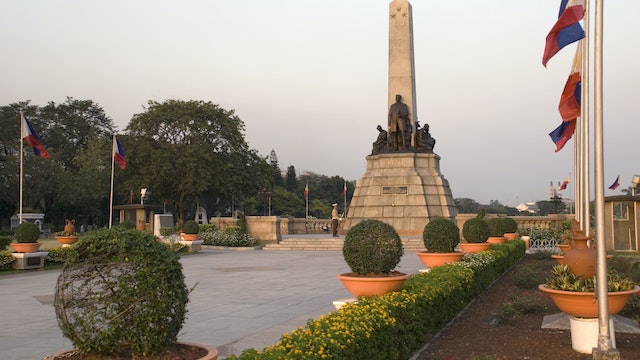 Still widely known as 'Luneta' (its name until the 1950s), Manila’s iconic central park is spread out over some 60 hectares of open lawns, ornamental gardens, ponds, paved walks and wooded areas, dotted with monuments to a whole pantheon of Filipino heroes. As the place where José Rizal was executed by the Spanish colonial authorities, it's also of great historical significance. The Rizal Park Visitors Centre provides a map detailing some 40 sights within the park.

Rizal Park an atmospheric place to take a stroll, particularly late afternoon, early evening and on weekends. Here you'll find the Rizal Monument, fronted by a 46m flagpole and guarded by sentries in full regalia, which contains the hero’s mortal remains and stands as a symbol of Filipino nationhood.

To one side of the monument you will find the Site of Rizal's Execution; at the entrance is a black granite wall inscribed with Rizal’s ‘Mi Ultimo Adios’ (My Last Farewell). Eight tableaux of life-size bronze statues recreate the dramatic last moments of the hero’s life. Evening light-and-sound presentations dedicated to Rizal usually take place here but are suspended indefinitely. When happening, they last 30 minutes and run every evening in both English and Tagalog.

On the other (south) side of the monument, toward Kalaw Ave, keep an eye out for the drinking fountain shipped all the way from Heidelberg, Germany, where Rizal spent time studying at university.

In the middle of the park is the Central Lagoon, a pool lined with busts of Filipino heroes and martyrs, and a dancing musical fountain that erupts in colourful explosions in the evening. Just north of the lagoon is the open-air auditorium, where the long-running (and free) classical Concert at the Park kicks off at 6pm on Sundays. There's a free Filipino rock concert here at the same time every Saturday night, while Friday nights see theatrical productions. The visitors centre has information on performances.

East of the auditorium are several ornamental gardens and the Chess Plaza, a shady spot where regulars test each other and look for new blood with shouts to visitors of ‘Hey Joe, do you play chess?’. At dawn, you'll find various groups gathered to practise t’ai chi or the local martial art of arnis, also know as arnis de mano, a pre-Hispanic style of stick-fighting.

At the east end of the park, where the National Museum is located, you'll find a large statue of Lapu-Lapu, a 16th-century national hero famous for slaying the Portuguese explorer Ferdinand Magellan; the flower-fillled Manila Orchidarium; and a gigantic three-dimensional relief map of the Philippines.