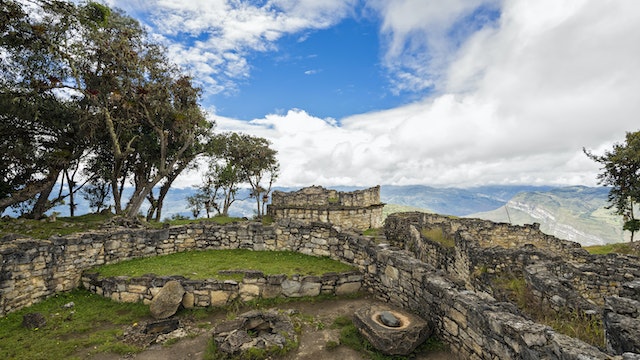 Travelers have their heads literally in the clouds when visiting the walled jungle fortress Kuélap in the northern highlands of Peru – the gateway to the Amazonas region. Overlooking the lush Utcubamba Valley, situated at 3000m (9842ft) above sea level, this remote pre-Inca site is spread over 15 acres, making it one of the largest stone ruins in the Americas. Built by the indigenous Chachapoyas, Kuélap includes over 400 circular buildings (many well-preserved) that can be reached by foot or cable car.

Dubbed the "Machu Picchu of the North," this lofty piece of history has yet to become a major tourism draw as the location is slightly off-the-beaten-path. The spectacular history and views of the cloud forest are reason enough however to take on the adventure of getting there.

A grandiose project, Kuélap was built by the Chachapoyas people (meaning “Cloud Warriors”) as early as the 7th century, a challenge that would continue on for at least another 400 years. The finished result is a near-mile-long stone complex divided into three sections, surrounded by walls (some reaching over 18m/60ft high) and with three narrow entrance points that would have forced intruders to slow down and enter in single file. Kuélap played witness to the flourishing Chachapoya culture and its purpose likely evolved with the years – fortress, refuge, strategic defense point and high-altitude city are among the site’s likely roles.

The Chachapoyas enjoyed a few hundred years of peace and development until another culture in Peru began expanding across the Andes and along the coast of Peru. According to archaeological evidence and chroniclers of the time, the Incas chased the Chachapoyas out of their sky-high fortress towards the end of the 15th century and built a few of their own structures on the premises; a century later they too would suffer a loss when the Spanish violently colonized the pre-Columbian empire.

Though the Incas were hoping to completely wipe out the Chachapoyas people, their legacy lives on in the genetic traces of indigenous communities that populate the modern Chachapoyas city.

Ultimately abandoned, Kuélap was on the path to ruin as local fauna began to invade the area and thick cloud forest blanketed it from the common explorer. For better or worse, a local judge on a field visit to the area happened upon the stone complex in the 1840s, though no records show if damage, theft or otherwise was carried out. Not until 1979 did Peru’s Ministry of Culture take notice and implement plans to protect and conserve a piece of its history.

Today the once-forgotten stronghold is on the Unesco World Heritage Site Tentative List and the recent (2017) implementation of on-site cable cars is just one effort to make Kuélap more appealing and accessible to tourists.

Top things to see at Kuélap

Only a third of Kuelap has actually been excavated and yet what is visible is quite striking and telling of the pre-Columbian Chachapoya culture.

Shielded by a colossal stone wall, the center of Kuelap is scattered with hundreds of low circular walls – the remnants of dwellings that were once covered by soaring thatched roofs. The round shapes are enough to make the Chachapoya culture unique, considering most ancient Andean cultures used straight lines in their designs. Epiphytes and orchids lure hummingbirds, which in turn guide visitors along the nearly 610-meter (2000ft) long site, passing rhomboid friezes and zoomorphic reliefs along the way.

Keeping a balance on the south and north ends, Kuélap is guarded by two towering structures. On the southwestern end of the site stands the Main Temple, also referred to as El Tintero (Inkpot). Fashioned in the shape of a large inverted cone, this enigmatic structure likely served religious or ceremonial purposes – archaeologists have found an underground chamber housing the remains of animal sacrifices, as well as graves and llama skeletons in the surrounding area. Meanwhile its height of 5.5m (18ft) has led others to speculate it was used as a solar observatory.

On the northwest is the 7-meter (23ft) tall Torreón, a tower perhaps used as a watchtower or for defensive purposes due to findings of stone weapons.

Located in northern Peru, where the Andes meet the Amazon, Kuelap is no stranger to sudden spouts of rain. The ideal time of year to visit Kuélap is between April and October, the so-called dry season (though rain in this region can be unpredictable any time of year). Temperatures will be slightly cooler, but the sun will likely be shining upon the high-altitude site.

Unlike Machu Picchu, Kuélap can be visited all year round. The main disadvantage of visiting between November and March is the high probability of rainfall, making any length of the hike much more difficult and the numerous changes in transportation required all the more uncomfortable.

Keep in mind that the site attracts a fair amount of local visitors on the weekends and holidays, so aim for a mid-week visit early in the morning.

It is recommended to wear light layers as well as to bring a sun hat, rain jacket, sunscreen and bug repellant.

The fastest way to get to Kuelap is by flying from Lima to the high jungle city Jaen, a 1.5-hour flight. There are typically two direct flights offered daily by Latam airlines, and it is recommended to take the early flight as, from Jaen, the city of Chachapoyas is a 4-hour drive by car or bus. Once in Chachapoyas take a taxi or colectivo (shared public transport) to Nuevo Tingo (about 1 hour away) to purchase lift tickets. Hop on a cable car for a scenic 20-minute ride that ascends towards Kuélap. After disembarking, travelers will have to walk 30 minutes to arrive at the site entrance.

In total, it takes about 8 hours of hopping on and off transportation to arrive at Kuélap (depending on bus or taxi availability and road conditions), making the journey of getting there an adventure in itself. There are plenty of small inns and hostels in Chachapoyas should travelers forgo the rush and enjoy a bit of rest before jumping in the car again to head to Nuevo Tingo.

Alternatively, those looking to stretch their legs can skip the cable cars and, from Tingo Viejo, embark on a 9km (5.6mi) hike through the cloud forest along the Camino Herradura. It takes about 3-4 hours to ascend the craggy mountainside and, though trails are well-marked, local guides can be hired in Chachapoyas city.

Once a site well off the beaten path, Kuélap is inching its way to popularity thanks to the cable cars and direct flights to Jaen – neither of which were transportation options a decade ago. However, the low fees for arrival and entrance are an indication of how little tourism the impressive site continues to receive.

Entrance to Kuélap costs S/30 for adults, S/15 for seniors and just S/2 for children 12 years or younger. Visitors should expect to spend at least 2 hours perusing the site. Hiring a local guide is strongly recommended to get the most out of the trip.