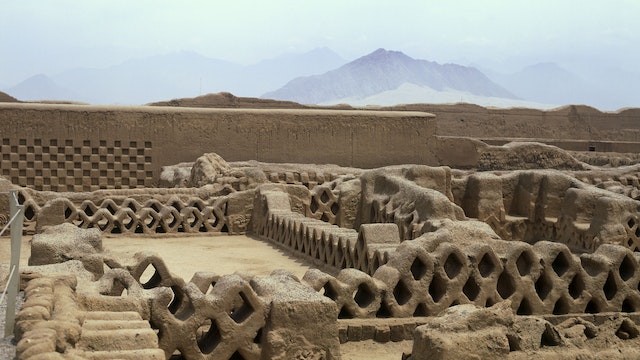 Built around AD 1300 and covering 20 sq km, Chan Chan is the largest pre-Columbian city in the Americas and the largest adobe city in the world. Although it must have been a dazzling sight at one time, devastating El Niño floods and heavy rainfall have severely eroded much of the city's outer portions. You can still visit the impressive restored Palacio Nik An complex and revel in the broad plazas, royal burial chamber and intricate designs that remain.

At the height of the Chimú empire, Chan Chan was home to an estimated 60,000 people and contained a vast wealth of gold, silver and ceramics. The wealth remained more or less undisturbed after the Incas conquered the city, but once the Spaniards hit the stage, the looting began. Within a few decades little but gold dust remained. Remnants of what was found can be seen in museums nearby.

The Palacio Nik An (also called the Tschudi Complex, after a Swiss naturalist) is the only section of Chan Chan that’s partially restored. Parts of the site are covered with tent-like structures to protect from erosion. It is possible that other areas will open in the future, but until they are properly policed and signed, you run the risk of being mugged if you visit them.

At the Palacio Nik An you’ll find an entrance area with tickets, souvenirs, guides, bathrooms and drinks, but there's no longer a cafe so bring snacks. Guides hang around next to the ticket office.

The best option for a visit is with an organized guided tour from Trujillo or with a local site tour guide, as signage is extremely limited. There are usually English-, French-, German- and Italian-speaking guides available here. If you want to go it alone, the path is marked out with fish-shaped pointers and you can purchase a small booklet for S2 at the ticket checkpoint with descriptions of the different areas of the complex and a map.

The complex’s centerpiece is a massive, restored ceremonial courtyard, where the 4m-thick interior walls are mostly decorated with re-created geometric designs. The ground-level designs closest to the door, representing three or four sea otters, are the only originals left and remarkably better preserved than many of the re-creations. A ramp at the far side of the high-walled plaza rises to the 2nd level (early wheelchair access?). Though all the Chan Chan walls have crumbled with time, parts of Nik-An's walls once stood more than 10m high.

Head out of the ceremonial courtyard and walk along the outside wall, which is one of the most highly decorated and best restored of Palacio Nik-An's walls. The adobe friezes show waves of fish rippling along the entire length of the wall above a line of seabirds. Despite their time-worn appearance, the few rougher-looking originals retain a fluidity and character somehow lacking in the contemporary version.

At the end of this wall, the marked path goes through the labyrinthine audience rooms. Their function is unclear, but their importance is evident in both the quantity and quality of the decorations – the rooms have the most interesting friezes in Palacio Nik An. Living so close to the ocean, the Chimú based much of their diet on seafood, and the importance of the sea reached venerable proportions. Fish, waves, seabirds and sea mammals are represented throughout the city, and in the audience rooms you’ll find all of them in the one place. For the Chimú, both the moon and the sea were of religious importance (unlike the Incas, who worshipped the sun and venerated the earth).

Further on, the second ceremonial courtyard also has a ramp to the second level. West of this plaza you visit the Gran Hachaque Ceremonial, a freshwater pool surrounded by a verdant border of reeds and grasses. This was no doubt an important space for ceremonial life.

To the left is an area of several dozen small, crumbling cells that has been called the Almacenes (warehouses). Perhaps soldiers lived here, or the cells may have been used for storage. Next is the mausoleum, where a king was buried along with human sacrifices and ceremonial objects. To the left of the main tomb, a pyramid containing the bodies of dozens of young women was found.

The final area is the assembly room. This large rectangular room has 24 seats set into niches in the walls, and its amazing acoustic properties are such that speakers sitting in any one of the niches can be clearly heard all over the room.

The site museum is out on the main road, about 500m before the main Chan Chan turnoff, and contains exhibits explaining Chan Chan and the Chimú culture. It has a few signs in Spanish and English, but a guide is still useful. The aerial photos and maps showing the huge extension of Chan Chan are fascinating, as tourists can only visit a tiny portion of the site.

Combis and buses to Chan Chan (S1.50) leave Trujillo every few minutes, passing the corners of España and Ejército, and España and Industrial. They'll drop you off at the turnoff, from where it's a 10-minute walk down to the ticket office. From Huanchaco take any Trujillo-bound transport.

A taxi from Trujillo or Huanchaco runs around S12.