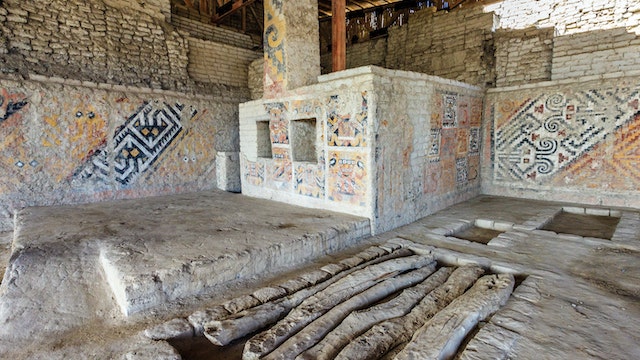 This archaeological complex right on the coast, about 60km from Trujillo, consists of the Huaca Prieta site, the Huaca El Brujo, which has only been minimally studied, and the magnificent excavated Moche site of Huaca Cao. At the last, with its brilliant mural reliefs, investigators made one of the most important discoveries in Peruvian archaeology in 2005, uncovering the elaborate tomb of a female governor, shaking up theories about gender roles in pre-Columbian cultures. The site has an excellent modern museum.

The complex is named El Brujo because local shamans used to meet at the site to practice ceremonies and rituals. The people who live near this huaca (mystical site) insist that it has positive energy and ceremonies are still occasionally performed here when someone needs to soak up good vibes.

Huaca Cao is the largest of the site's ruins. It was constructed in various phases between AD 100 and 700 and its main section houses a 27m-high truncated pyramid with some of the best friezes in the area. They show magnificently multicolored reliefs with stylized life-sized warriors, prisoners, priests and human sacrifices. There are also many burial sites from the Lambayeque culture, which followed the Moche.

It was here that the tomb of the Señora de Cao was discovered. The governor was buried with more than 100 metal objects, including crowns, necklaces and earrings, which can be observed along with the mummified remains of the leader in the well-designed Museo de Cao next to the site. A new exhibit includes a computer-generated, life-like bust of the Señora de Cao created by international forensic experts.

The Huaca El Brujo, or Huaca Cortada (the Cut Ruin), is the second most important structure in the complex and is so called for the large deep cut in its facade made by huaqueros looking for treasure. Like Huaca Cao it was occupied by the Moche from around AD 100 to 700. It's believed that it could have been an administrative center.

Also in the complex is the Huaca Prieta, which is said to date back to 12,000 BC and marks the first settlement in the area. It has been one of the most intensively studied early Peruvian sites. For non-archaeologists, however, it’s generally more interesting to read about than to tour. Although it’s simply a prehistoric pile of refuse, it does afford extensive views over the coastal area and can be visited along with the other huacas in the archaeological complex.

Local residents are available to guide visitors around the site for a voluntary contribution.

Reaching the complex on your own is complicated. The safest route is to catch a bus in Trujillo bound for Chocope (S3.50, 1½ hours) from Ovalo del Papa southwest of town. Switch to a colectivo to Magdalena de Cao (S2.50, 20 minutes), where you’ll need to negotiate with a mototaxi (three-wheeled motorcycle rickshaw taxi) to take you to and from the site with waiting time. There is very little public transportation out this way.