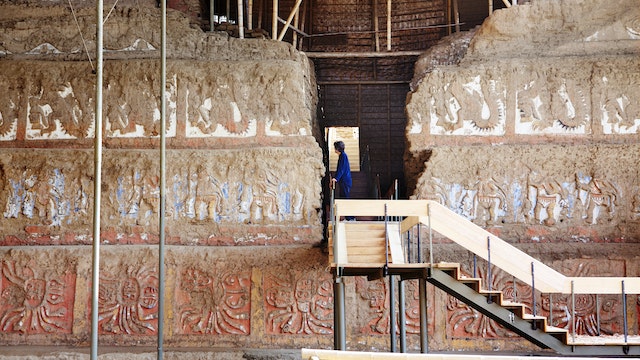 If there's one must-see archaeological site in the region, this is it. The Temples of the Sun and the Moon, attributed to the Moche period, are more than 700 years older than Chan Chan, yet parts of the complex are remarkably well preserved. Located on the south bank of the Río Moche, the main attraction here is the Huaca de la Luna with its phenomenal multicolored friezes. The entrance price includes an English-speaking guide; individual travelers need to wait for a group to fill. The larger Huaca del Sol is closed to visitors.

Archaeologists believe the Huaca de La Luna was the religious and ceremonial center of the Moche capital, while the Huaca del Sol was the administrative center. The two edifices are separated by 500m of open desert that once contained the dwellings and other buildings of the common residents.

While Huaca de la Luna is smaller than its neighbor, it proves that, in Moche pyramids at least, size isn’t everything. The structure is riddled with rooms that contained ceramics and precious metals and are adorned with some of the beautiful polychrome friezes for which the Moche were famous. The huaca was built over six centuries to AD 600, with six succeeding generations expanding on it and completely covering the previous structure.

Archaeologists onion-skinning selected parts of the huaca have discovered that there are friezes of stylized figures on every level, some of which have been perfectly preserved by the later levels built around them.

Enthusiastic local guides will walk you through different parts of the complex and explain the richly colored motifs depicting Moche gods and zoomorphic figures, before leading you to the spectacular finale: the magnificent, richly decorated external wall. Don't even think of dropping out early. Many of the guides are volunteers, so tips are appreciated.

From the Huaca de la Luna site there are good views of the Huaca del Sol, which is the largest single pre-Columbian structure in Peru, though about a third of it has been washed away. The structure was built with an estimated 140 million adobe bricks, many of them marked with symbols representing the workers who made them. At one time the pyramid consisted of several different levels connected by steep flights of stairs, huge ramps and walls sloping at 77 degrees. The last 1500 years have wrought their inevitable damage, and today the pyramid looks like a giant pile of crude bricks partially covered with sand. Despite this, its size alone makes the pyramid an awesome sight. The Huaca del Sol is not currently open to visitors as only minimal research has been conducted on the site.

Around 600m from the Huaca de la Luna car park, the excellent Museo Huacas de Moche is a fascinating and well-planned museum with three rooms of objects excavated from the site and explanations in Spanish and English. Visitors need to check in here to buy a ticket and schedule a tour before heading over to the Huaca de la Luna. Entry to the museum costs an additional S5, and it's well worth popping in while you wait for your tour departure.

As you leave look around for biringos, the native Peruvian hairless dogs that hang out here. Their body temperature is higher than that of normal dogs and they have traditionally been used as body warmers for people with arthritis.

Combis (S1.50) for the Huacas del Sol y de la Luna leave from Av Los Incas in Trujillo every 15 minutes or so. It’s also possible to take a taxi (S15).