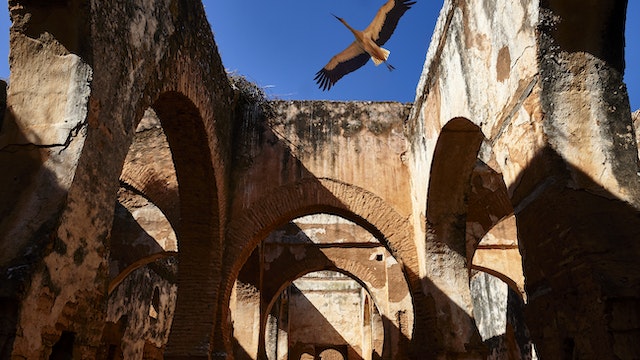 First came the Phoenicians, then the Romans took control of this beautiful hilltop site above the fertile Bou Regreg river plain around 40 CE. From 1154, it lay abandoned until the 14th century, when a Merinid sultan built a necropolis on top of the Roman site. An elegant minaret, now topped by a stork’s nest, is all that's left of a once-impressive mosque and behind it, the sultan's tomb, complete with stone carving and mosaic traces.

To its right (east) are the tombs of several saints and the Bassin aux Anguilles, a pool that attracts women who believe that feeding boiled eggs to its resident eels brings fertility and easy childbirth. Next to the minaret, at a lower level, is a small medersa (school for studying the Quran) with the remains of pillars, students’ cells, a mihrab (niche indicating the direction of Mecca) and an ornamental pool. At the bottom of the site, on the slope beneath the tomb of Sultan Abu Al Hasan and his wife, is a shady walkway lined with flowers, palm trees and bamboo.

The Chellah is an evocative setting for several of the city's festivals, including Jazz au Chellah and Mawazine.