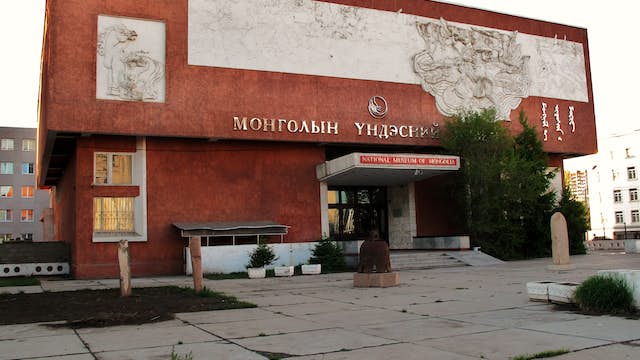 Mongolia’s wonderful National Museum sweeps visitors from the Neolithic era right to the present day. It’s UB's only genuine blockbuster sight, offering an unparalleled overview of Mongolian culture, ranging from stone-age petroglyphs and exquisite gold ornamentation to, arguably the highlight, the full gamut of traditional ceremonial costume – which unmistakably inspired the look of characters from the Star Wars prequels.

The 1st floor has some interesting exhibits on Stone Age sites in Mongolia, as well as petroglyphs, deer stones (stone sculptures of reindeer and other animals) and burial sites from the Hun and Uighur eras. Look for the remarkable gold treasure (including a golden tiara), found in 2001 by archaeologists digging near the Kul-Teginii Monument in Övörkhangai.

The 2nd floor houses an outstanding collection of costumes, hats and jewellery, representing most of Mongolia’s ethnic groups. Take a gander at some of the elaborate silverwork of the Dariganga minority or the outrageous headgear worn by Khalkh Mongols. Some of the outfits contain 20kg to 25kg of silver ornamentation.

The 3rd floor is a must-see for fans of the Mongol horde. The collection includes real examples of 12th-century Mongol armour, and correspondence between Pope Innocent IV and Guyuk Khaan. Written in Latin and Persian and dated 13 November 1246, it bears the seal of the khan. There is also a display of traditional Mongolian culture with, among other things, a furnished ger, traditional herding and domestic implements, saddles and musical instruments. In the 20th-century-history section, look out for D Sükhbaatar’s famous hollow horsewhip, inside which he hid a secret letter written in 1920 by the Bogd Khan enlisting the aid of the Russian Red Army. It also covers the Soviet era, including the suit of cosmonaut Jügderdemidiin Gurragchaa, the first Mongolian in space.

The final hall contains a rousing, self-congratulatory display of Mongolia’s recent history and the 1990 democratic revolution, with no mention of the breadlines of the early 1990s or other hardships of the transition from communism to democracy.