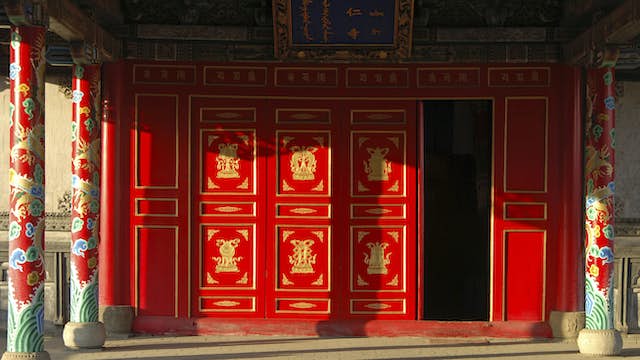 This temple museum smack in the middle of downtown Ulaanbaatar was the home of Luvsan Haidav Choijin Lama (‘Choijin’ is an honorary title given to some monks), the state oracle and brother of the Bogd Khan. Construction of the monastery commenced in 1904 and was completed four years later. It was closed in 1938 and probably would have been demolished had it not been saved in 1942 to serve as a museum demonstrating the ‘feudal’ ways of the past.

Although religious freedom in Mongolia recommenced in 1990, this monastery is no longer an active place of worship.

There are five temples within the grounds. As you enter, the first temple you see is the Maharaja Süm. The main temple features statues of Sakyamuni (the historical Buddha), Choijin Lama and Baltung Choimba (the teacher of the Bogd Khan), whose mummified remains are inside the statue. There are also some fine thangka paintings and some of the best tsam masks in the country. The gongkhang (protector chapel) behind the main hall contains the oracle’s throne and a magnificent statue of yab-yum (mystic sexual union).

The other temples are Zuu Süm, dedicated to Sakyamuni; Yadam Süm, which contains wooden and bronze statues of various gods, some created by the famous Mongolian sculptor Zanabazar; and Amgalan Süm, containing a self-portrait of Zanabazar himself and a small stupa apparently brought to Ulaanbaatar by Zanabazar from Tibet.

The audio guide offers detailed information, and there are also volunteer guides who can answer your questions.

The complex is located off Jamyn St, with the entrance on the south side. The T50,000/100,000 fee for photography/video means it's mainly one for professionals.