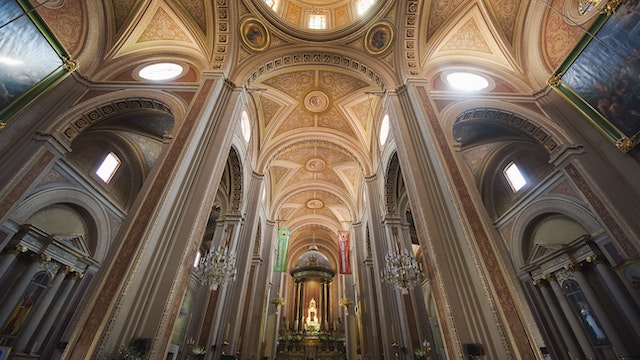 Morelia’s cathedral, considered by many to be the country's most beautiful, dominates the city center, where it flanks rather than faces the central plaza. It took almost a century to build (1660−1744), which explains its potpourri of styles: the twin 70m-high bell towers, for instance, have classical Herreresque bases, baroque midsections and multicolumned neoclassical tops. It's particularly impressive when lit up for the Encendido de Catedral.

Much of the baroque reliefs inside were replaced in the 19th century with neoclassical work. Fortunately, one of the highlights was preserved: a sculpture of the crucified Christ called the Señor de la Sacristía in a chapel to the left of the main altar. It is made from pasta de caña (a paste made from the heart of the cornstalk) and is topped with a gold crown gifted to the church by the Spanish King Felipe II in the 16th century. The organ counts 4600 pipes – the second largest pipe organ in Mexico (the first is in Zamora, Michoacán); occasional organ recitals take place here – a beautiful time to be in the cathedral.