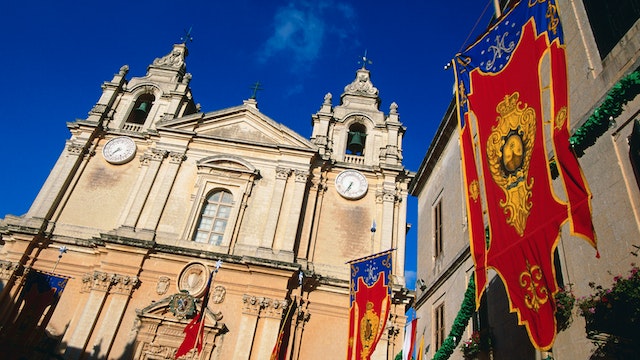 The cathedral is said to be built on the site of the villa belonging to Publius, the Roman governor of Malta who welcomed St Paul in AD 60.

The original Norman church was destroyed by an earthquake, and the restrained baroque edifice you see today was built between 1697 and 1702 by Lorenzo Gafa, who was influenced by the Italian master Borromini. Note the fire and serpent motifs atop the twin bell towers, symbolising the saint's first miracle in Malta.

Echoing St John's Co-Cathedral in Valletta, the floor of St Paul's is covered with the polychrome marble tombstones of Maltese nobles and important clergymen, while the vault is painted with scenes from the life of St Paul. The altar painting The Conversion of St Paul by Mattia Preti survived the earthquake, so too did the beautifully carved oak doors to the sacristy on the north side, and the apse above the altar, featuring the fresco St Paul's Shipwreck.