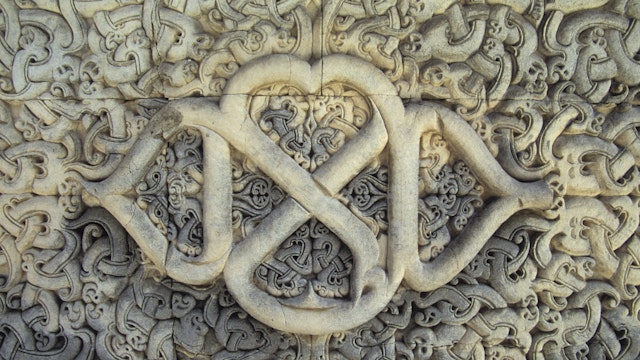 This is the oldest mosque in the country, dating from 1656. It’s a beautiful structure made from coral stone into which intricate decoration and Quranic script have been chiselled. Non-Muslims wishing to see inside are supposed to get permission from an official of the Ministry of Islamic Affairs. Most of the staff are officials of the ministry, however, and so if you are conservatively dressed and it's outside prayer times, you may well get permission to enter on the spot.

Even though an ugly protective corrugated-iron sheet now covers the roof and some of the walls, this is still a fascinating place. The interior is superb and famed for its fine lacquer work and elaborate woodcarvings. One long panel, carved in the 13th century, commemorates the introduction of Islam to Maldives. The mosque was built on the foundations of an old temple that faced west towards the setting sun, not northwest towards Mecca. Consequently, the worshippers have to face the corner of the mosque when they pray – the striped carpet, laid at an angle, shows the correct direction.

Overlooking the mosque is the solid, round, blue-and-white tower of the munnaaru – the squat minaret. Though it looks a bit neglected rather than particularly old, this minaret dates from 1675. To one side of the mosque is a cemetery with many elaborately carved tombstones. Stones with rounded tops are for females, those with pointy tops are for males and those featuring gold-plated lettering are the graves of former sultans. The small buildings are family mausoleums and their stone walls are intricately carved. Respectably dressed non-Muslims are welcome to walk around the graveyard; you don’t require permission for this.