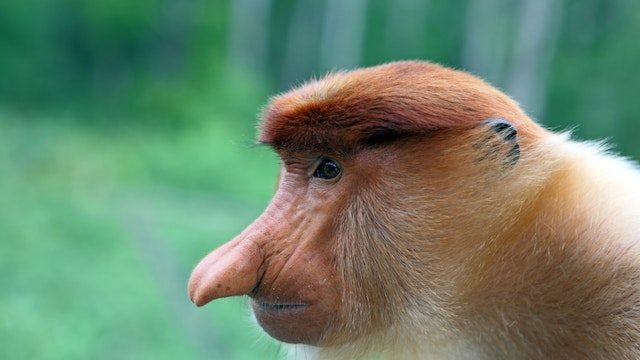 A local palm-plantation owner has created a private proboscis monkey sanctuary, attracting the floppy-conked locals with sugar-free pancakes at 9.30am and 2.30pm feedings at Platform A, and 11.30am and 4.30pm at Platform B, 1km away. An estimated 300 wild monkeys live in the 6-sq-km reserve. The proboscis monkeys are enticed with food, which may put you off if you're looking for a more ecologically minded experience. Come here by shuttle (one way/return RM20/40) from SORC (10.30am) or Sandakan (9.30am, departing Hotel Sandakan).

Proboscis monkeys (Nasalis larvatus) are found only on Borneo, although if you take a close look at them, you'd swear you've spotted one in the corner of a dodgy bar. Named for their long bulbous noses, proboscis monkeys are potbellied and red-faced, and males are constantly, unmistakably…aroused. With the arrival of Europeans, Malays nicknamed the proboscis monyet belanda (Dutch monkey). Also keep an eye out for the delicately featured silver leaf langurs with their orange-coloured babies.

A private shuttle is operated by the Labuk Bay Proboscis Monkey Sanctuary (RM20 per person one way). It departs Hotel Sandakan at 9.30am, arrives at Sepilok 40 to 45 minutes later, then departs Sepilok at 10.30am to arrive at Labuk Bay in time for the feeding at Platform B (11.30am). The return journey to Sandakan is at 3pm (so you could catch a second feeding at Platform A (2.30pm). If you wish to head back to Sandakan earlier, however, you can pay RM80 per person. Teluk Labuk (Labuk Bay) sits 15km off the main highway. The route is signposted and largely paved. Lodgings in Sepilok can arrange transport, including waiting time, for around RM120; SORC taxis charge similar prices.

Food and accommodation are provided at the sanctuary's Nipah Resort.