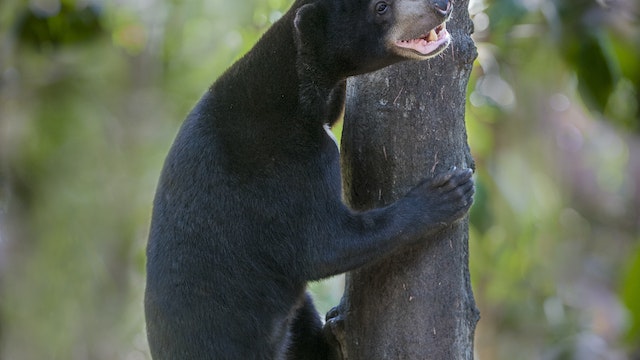 The wonderful BSBCC provides care to rescued sun bears (44 at the time of writing), the world's second-most endangered bear. It's possible to see the bears foraging, climbing and sunning themselves in the forest from two elevated walkways and viewing platforms. There are telescopes set up for a closer look and the centre has full access for people with disabilities. The gift shop screens an educational video on BSBCC and its valuable work.

Named for the golden bracelet of fur around their necks, the sun bears' Rorschach-like pattern is never duplicated, varying as they do in colour from cream to orange. At a maximum of 150cm and 60kg in weight, they are little larger than Paddington and are the smallest of the world's bears. Sun bears are found throughout Southeast Asia, in eastern India, southern China, Myanmar, Laos, Vietnam and Borneo, usually at an altitude of around 2700m. An average male sun bear needs at least 39 sq km of forest to find sufficient food. They're excellent climbers, equipped with long claws to scale high trees in search of beehives. As they'll rip a cavity in the trunk to get to their honey, they create a safe place for hornbills and other birds to nest at a later date. They also control the forest's destructive population of termites, which are a critical part of the bears' diet.

Across Asia the sun bear is caught and slaughtered for meat and Chinese medicine. In countries such as China and Vietnam, the poor beasts are strapped in tiny cages and hooked to IVs that pump bile from their gallbladders. Thankfully this does not happen in Sabah, though the bears are still under enormous threat from habitat loss. Animals donated to the centre are first checked for diseases they may have caught as humans' pets, before being transferred to the training pen. A new arrival will learn to socialise, climb, build nests and forage before its eventual release into the wild.

It's possible to donate to help with feeding and veterinary costs and to 'adopt' a bear. If you wish to volunteer as a keeper, it costs RM8180 for a month, or RM4368 for two weeks, including accommodation and meals. See the website for details.