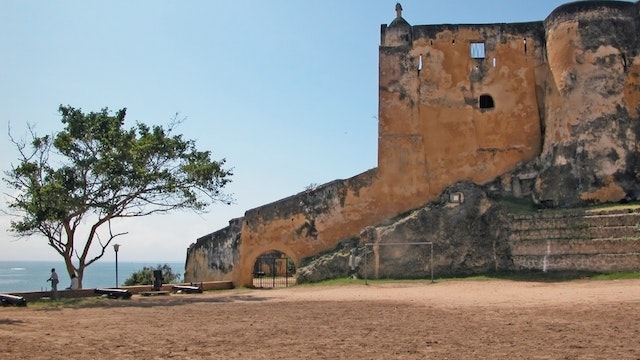 This 16th-century fort and Unesco World Heritage treasure is Mombasa’s most visited site. The metre-thick walls, frescoed interiors, traces of European graffiti, Arabic inscriptions and Swahili embellishment aren’t just evocative, they’re a palimpsest of Mombasa's history and the coast writ in stone. You can climb on the battlements and explore its tree-shaded grounds.

The fort was built by the Portuguese in 1593 to serve as both symbol and headquarters of their permanent presence in this corner of the Indian Ocean. It’s ironic, then, that the construction of the fort marked the beginning of the end of local Portuguese hegemony. Between Portuguese sailors, Omani soldiers and Swahili rebellions, the fort changed hands at least nine times between 1631 and the early 1870s, when it finally fell under British control and was used as a jail; it opened as a museum in 1960.

The fort was the final project completed by Giovanni Battista Cairati, whose buildings can be found throughout Portugal’s eastern colonies, from Old Goa to Old Mombasa. The building is an opus of period military design – assuming the structure was well manned, it would have been impossible to approach its walls without falling under the cone of interlocking fields of fire.

Within the fort compound, the Mazrui Hall, where flowery spirals fade across a wall topped with wooden lintels left by the Omani Arabs, is worthy of note. In another room, Portuguese sailors scratched graffiti that illustrates the multicultural naval identity of the Indian Ocean, leaving walls covered with four-pointed European frigates, three-pointed Arabic dhows and the coir-sewn ‘camels of the ocean’: the elegant Swahili mtepe (traditional sailing vessel). The Omani house, in the San Felipe bastion in the northwestern corner of the fort, was built in the late 18th century and has a small fishing dhow outside it. Inside there's a small exhibition of Omani jewellery, weaponry and other artefacts. The eastern wall includes an Omani audience hall and the Passage of the Arches, which leads under the pinkish-brown coral to a double-azure vista of sea floating under sky.

There's a museum in the centre of the fort that displays finds from 42 Portuguese warships that were sunk during the Omani Siege in 1697, from barnacled earthenware jars to Persian amulets and Chinese porcelain. Like the rest of the complex, they are poorly labelled and woefully displayed. Despite this, the fort is unmissable.

If you arrive early in the day, you may avoid group tours, but the same can’t be said of the guides, official and unofficial, who will offer you tours the minute you approach the fort. Some of them can be quite useful and some can be duds. Unfortunately you’ll have to use your judgement to suss out which is which. Official guides charge KSh1200 for a tour of Fort Jesus or the Old Town; unofficial guides charge whatever they can. If you don’t want a tour, shake off your guide with a firm but polite 'no', or they’ll launch into their spiel and expect a tip at the end. Alternatively, you can buy the Fort Jesus guide booklet from the ticket desk and go it alone.