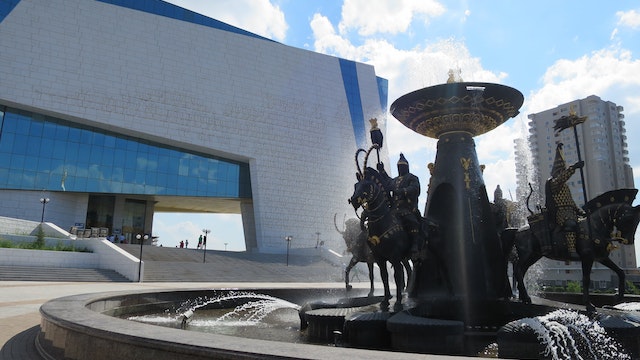 This huge blue-glass-and-white-marble museum covers the history and culture of Kazakhstan from ancient to modern times. Themed halls comprise interactive displays and artifact exhibits, ranging from a yurt in the Hall of Ethnography to a chronicle of the capital's modern history in the Hall of Astana. Don't miss the Golden Hall, which houses several thousand Bronze Age ornaments from the famed 'Golden Man' (a national symbol of Kazakhstan) – a 3rd- or 4th-century warrior whose gold-clad remains were uncovered in 1969.

Visitors are welcomed into the grandiose entry hall by a giant golden eagle soaring over a vast map of the country. Highlights include the Hall of Ethnography, with its rich collection of objects related to Kazakhstan's nomadic culture. Also not to be missed are the Golden Hall's outstanding collections of Kazakh jewellery and ‘gold and gold-makings’. These include gold jewellery and replicas from the Scythian burial mounds at Berel and the Issyk burial mound (where the Golden Man was found), replicas of the Golden Man and the ‘second Golden Man’ from western Kazakhstan, a bejewelled replica of a horse from the Berel tomb, and real 4th-century-BC horse's innards pickled in formaldehyde!

The People of Kazakhstan is an interesting look at the diverse ethnicities who call the country home, largely as a result of Stalin-era deportations, while 20th century history displays are a sobering look at Soviet-era repressions and WWII losses. The contemporary art section shows off Kazakh contributions in the 20th and 21st centuries.