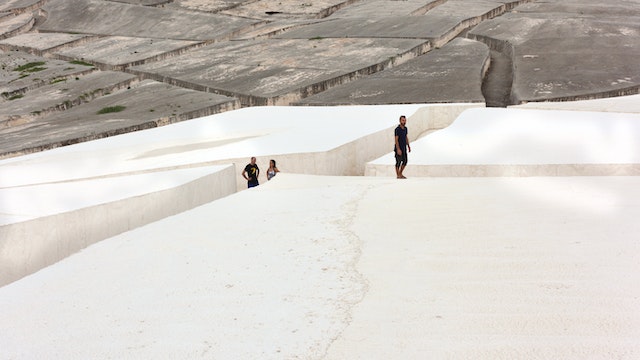 Midway between the ancient ruins of Selinunte (38km south) and Segesta (45km north) lies this extraordinary modern marvel – a disconcerting, lunar-like sea of white cement tumbling down a green hillside in the Valle dei Belice where, in January 1968, the village of Gibellina was wiped out by a devastating earthquake. While the village was subsequently reconstructed 18km west (today, Nuova Gibellina), artist Alberto Burri (1915–95) set about creating an unforgettable piece of land art on the very spot where the original village stood.

Burri essentially buried the village ruins in cement to create a dramatic labyrinth of narrow streets said to mirror the destroyed village's original street plan. Lack of funds saw work on the monumental art piece – at around 85,000 sq m one of Europe's largest – grind to a halt in 1989 and it was only finished in 2015, to mark what would have been the Italian artist's 100th birthday. Staggering on foot up the steep, uncannily quiet passages carved out within the 1.5m-thick slab of cement is eery and unsettling. Big green views of the natural landscape surrounding the cement monstrosity only heighten the drama.

To grasp and appreciate the full horror of Gibellina's destruction and the harrowing story of displacement that ensued as villagers struggled to adapt to life in a 'new town', void of intimate village piazzas and tiny village cafes, it's worth a fleeting visit afterwards to Nuova Gibellina, 18km west along the corkscrew SS119. Designed as a 'utopian town' in collaboration with some of Europe's top architects of the time, the modern town is a soulless, deserted grid of streets, built for 20,000 inhabitants but home to less than 5000 today. The gargantuan theatre – never completed – stands abandoned and derelict, while many of the elderly people who do live here struggle to walk up the monumental flight of stairs leading to the Chiesa Madre (1972), a Modernist church built around a colossal 15m-diameter white globe.

To reach the Cretto di Burri by car, take the Santa Ninfa exit off the Mazara-Palermo autostrada (A29) and follow the brown signs for 'Ruderi di Gibellina' (Ruins of Gibellina) along the SS119. To drive directly to Nuova Gibellina, exit the A29 further north at the 'Gibellina' exit.