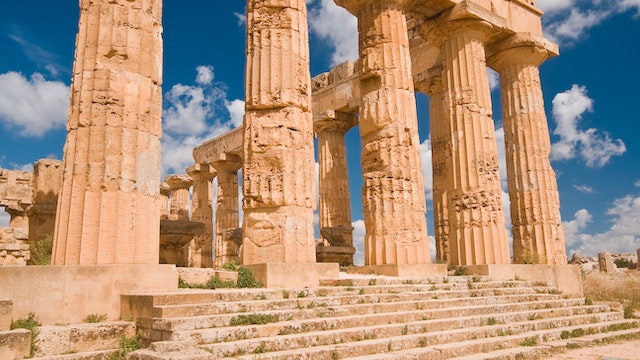 The Acropolis, the heart of Selinunte's political and social life, occupies a slanted plateau overlooking the now-silted-up Gorgo di Cottone. Huddled in the southeastern part are five temples (A, B, C, D and O). Virtually the symbol of Selinunte, Temple C is the oldest temple on the site, built in the middle of the 6th century BC.

The stunning metopes found by Harris and Angell were once a part of this formidable structure, as was the enormous Gorgon's mask that once adorned the pediment; both of these can be viewed in the Museo Archeologico Regionale in Palermo. Experts believe that the temple was dedicated to Apollo.

Northernmost of the remaining temples is Temple D, built towards the end of the 6th century BC and dedicated to either Neptune or Venus.

The smaller Temple B dates from the Hellenistic period and could have been dedicated to the Agrigentan physiologist and philosopher Empedocles, whose water-drainage scheme saved the city from the scourge of malaria (a bitter irony for William Harris, who contracted the disease during the initial excavations and died soon after).

The two other temples, Temple A and Temple O, closest to the sea, are the most recent, built between 490 and 480 BC. They are virtually identical in both style and size, and it's been suggested that they might have been dedicated to the twins Castor and Pollux.