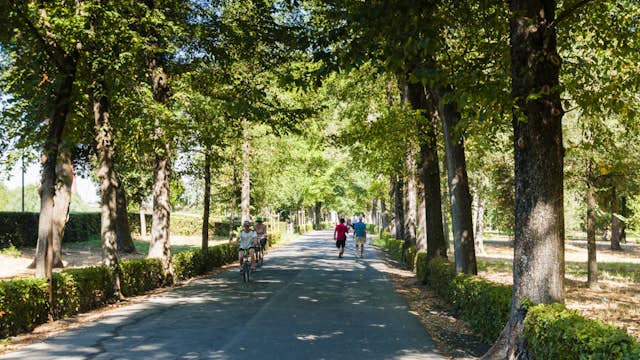 Florence's largest park is dotted with playgrounds and is a great place to let the little 'uns loose. Families take over at weekends and the park is a colourful scene with rollerbladers, kite-flyers, joggers and kids on bikes. In summer you can also use Le Pavoniere swimming pool.

The Medici dukes made this a private hunting reserve, but Peter Leopold opened it to the public in 1776, with boulevards, fountains and bird sanctuaries (now the swimming pool). In the late 19th century, horse racing began here. Queen Victoria was a fan of Florence and would toddle along to the Cascine during her stays.

At the extreme west end of the park is a monument to Rajaram Cuttiputti, an Indian maharajah who, while holidaying in Florence in 1870, came down with gastroenteritis and died. His retinue was surprisingly granted permission to cremate him by the river. Four years later a statue and memorial were designed by British artisans.