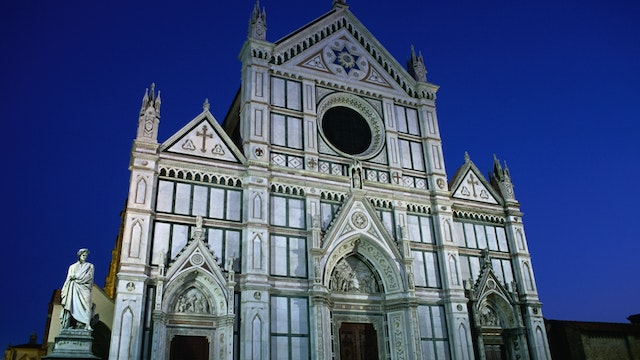 The austere interior of this Franciscan basilica is a shock after the magnificent neo-Gothic facade enlivened by varying shades of coloured marble. Most visitors come to see the tombs of Michelangelo, Galileo and Ghiberti, but frescoes by Giotto in the chapels to the right of the altar are the real highlights. The basilica was designed by Arnolfo di Cambio between 1294 and 1385 and owes its name to a splinter of the Holy Cross donated by King Louis IX of France in 1258.

Some of its frescoed chapels are much better preserved than others – Giotto's murals featuring John the Baptist in the Cappella Peruzzi (1310–20) are in particularly poor condition. Those painted between 1320 and 1328 in the neighbouring Cappella Bardi, depicting scenes from the life of St Francis, have fared better. Giotto's assistant and most loyal pupil, Taddeo Gaddi, frescoed the nearby Cappella Baroncelli (1328–38) with scenes from the life of the Virgin.

Taddeo's son Agnolo painted the Cappella Castellani (1385), with frescoes depicting the life of St Nicholas, and was also responsible for the frescoes above the altar.

From the transept chapels a doorway designed by Michelozzo leads into a corridor, off which is the Sagrestia (Sacristy), an enchanting 14th-century room with Taddeo Gaddi's fresco of the Crucifixion. On the left as you enter, look for the late-15th-century glazed terracotta bust of Christ by Andrea della Robbia, all too often overshadowed by the large painted wooden cross (c 1288) by Cimabue suspended from the wooden ceiling. One of many priceless artworks to be damaged in the 1966 floods that inundated Santa Croce in more than 4m of water, the crucifix took 10 years to restore and has since become a symbol of the catastrophe that struck the city and its subsequent comeback.

Through the next room, the church bookshop, you can access the Scuola del Cuoio, a leather school where you can see bags being fashioned and buy the finished products.

At the end of the corridor is a Medici chapel with a fine two-tone altarpiece in glazed terracotta by Andrea della Robbia. This was the original burial place of Galileo, from his death in 1642 until 1737 when arrangements were finally made for his reburial in the nave of the basilica. A small room to the left of the altar contains a bust of the scientist and a plaque marking the spot where his first tomb was.

Post-chapel, backtrack to the church and follow the 'Uscita' (exit) sign, opposite the main entrance, to access the basilica's two serene cloisters designed by Brunelleschi just before his death in 1446. His unfinished Cappella de' Pazzi, on the left at the end of the first cloister, is notable for its harmonious lines and restrained terracotta medallions of the Apostles by Luca della Robbia, and is a masterpiece of Renaissance architecture. It was built for, but never used by, the wealthy banking family destroyed in the 1478 Pazzi Conspiracy – when papal sympathisers sought to overthrow Lorenzo Il Magnifico and the Medici dynasty.

Continue to the second cloister where a glass door leads into a gallery showcasing various artworks, climaxing with the cavernous Cenacolo (Refectory) where 150 Franciscan monks shared meals together in the 15th century, warehouse goods were stored in the 20th century and floodwaters hit a high of 5m in 1966. While Taddeo Gaddi's dazzling The Last Supper (1334–56) fresco fills the entire far wall, it is Georgio Vasari's magnificent The Last Supper (1546) that steals the show. Submerged in floodwater for at least 12 hours, the severely damaged oil painting was only returned to Santa Croce in 2016, following 50 years of restoration.