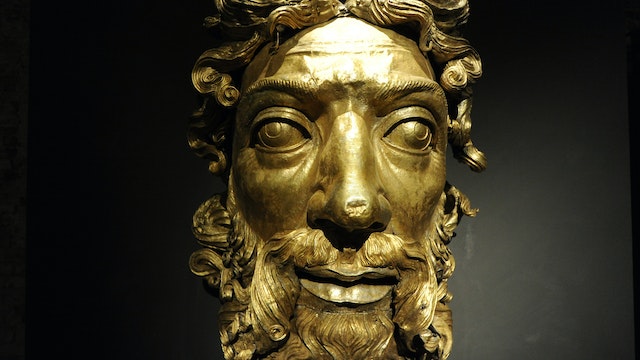 This awe-inspiring story of how the duomo and its cupola came to life is told in this well-executed museum. Among its sacred and liturgical treasures are the baptistry's original doors: the gloriously golden, 16m-tall gilded bronze Porta del Paradiso (Doors of Paradise; 1425–52) designed by Ghiberti for the eastern entrance; the northern doors (1402–24), also by Ghiberti; and – from the end of 2019 – the spectacular Porta Sud (South Door; 1330-36) by Andrea Pisano, illustrating the story of John the Baptist.

Michelangelo's achingly beautiful La Pietà, sculpted when he was almost 80 and intended for his own tomb, is also here. Vasari recorded in his Lives of the Artists that, dissatisfied with both the quality of the marble and of his own work, Michelangelo broke up the unfinished sculpture, destroying the arm and left leg of the figure of Christ. A student of Michelangelo's later restored the arm and completed the figure. Fittingly, the sculpture is the only work displayed in the Tribuna di Michelangelo (Room 10); take time to read, on the opposite wall, the hauntingly beautiful sonnet written by Michelangelo while he was working on this piece.

The museum's spectacular main hall, the Sala del Paradiso, is dominated by a life-size reconstruction of the original facade of Florence's duomo, decorated with some 40 14th- and early-15th-century statues carved for the facade by 14th-century masters. Led by Arnolfo di Cambio, building work began in 1296 but it was never finished and in 1587 the facade was eventually dismantled. This is also where you will find Ghiberti's and Pisano's dazzling doors.

In Room 8, the Sala della Maddalena, it is impossible to miss Donatello's famous wooden representation of a gaunt, desperately desolate Mary Magdalene, a mid-15th-century work completed late in the sculptor's career.

Continuing up to the 1st floor, Rooms 14 and 15 explain in detail just how Brunelleschi constructed the ground-breaking cathedral dome. Look at 15th-century tools, pulleys, tackles and hoisting wagons used to build the cupola, watch a film and admire Brunelleschi's funeral mask (1446). On the 2nd floor, look at a fascinating collection of models of different proposed facades for the cathedral. End on a high with big views of the red-tiled cupola up close from the 3rd-floor, open-air Terrazza Brunelleschiana.